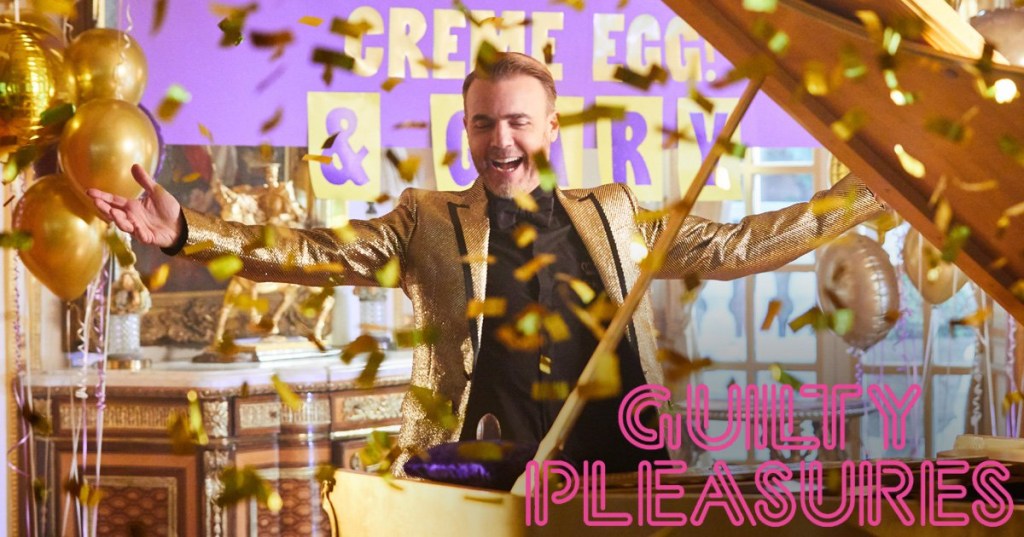 The Greatest Day singer is making everyone feel old as he turns 50… and he explained why he still can’t be trusted to pick out his own birthday suit.

Gary, who would roll around in boxer shorts and black leather as frontman of Take That, the biggest boyband of the ’90s, says he has never come to terms with being a sex symbol.

‘I was never the cool kid at school, I’ve always felt like I couldn’t be trusted to dress myself,’ said Gaz. ‘I’m just a guy who writes songs and sits in a studio.

‘We were five — actually I can’t include myself in this — but the other guys were four extremely good-looking boys.

‘As we walked on stage, girls went mad. The madder they went, the more we loved it. We were on the covers of magazines before we had any hits. So image and fashion kind of came first for us,’ he told OK! magazine.

‘I’ll be honest, it’s always been an area I’ve struggled with.’

After being forced to abandon his plans for a celebratory gig at the London Palladium, Gary has settled for sharing his 50th birthday thunder with Cadbury’s Creme Egg.

‘Turning 50 is a landmark moment in everyone’s life and I am so excited that I share my special day with such an important British icon, my favourite chocolate gooey egg!’ said Gazza. ‘It has been my honour to kick off the Golden Goobilee celebrations in style.’

Don’t ask me if I have got a Dua date…

Dua Lipa won’t be adding to her boyfriend Anwar Hadid’s famous family any time soon, despite sparking a pregnancy rumour.

The Levitating singer went on US TV to announce she wasn’t expecting, following a blunder on social media.

Dua, whose fella Anwar is the brother of models Gigi and Bella Hadid, showed off a flat tummy as she told Jimmy Kimmel Live! how the baby chatter came about.

It started last week when she shared a photo of herself in a skimpy green tartan dress to Instagram. But it wasn’t her fashion choice that caught the eye.

Dua included a baby’s bottle emoji alongside sparkles and an angel, leading to speculation that she was pregnant.

The 25-year-old explained: ‘I like finding little random emojis, like a little baby bottle or angels and sparkles. Random.

‘And then I see people saying I posted some cryptic message that I might be announcing my pregnancy. And I’m just like, “These emojis have come to bite me in the arse.”’

There will be no mini Hadids for a while. Asked by Kimmel if she will announce a future pregnancy through emojis, Dua quipped: ‘No, because I’d be the boy who cried wolf.’

Pregnant Gigi, one of the ladies who munch

The 25-year-old model and her boyfriend Zayn Malik welcomed a baby girl in September, and Gigi has been talking about the early days of her pregnancy with fans.

Responding to a Twitter question, she said she found she was expecting last January, shortly before going out on Tom Ford’s runway, but her mum Yolanda saved the day. ‘I was so nauseous backstage but I learned I could kinda control it if I continuously ate, so my mom would pack me snacks,’ she said.

Meanwhile, Zayn copped a backlash after he spoke to fans online in the early hours, smoking a dodgy-looking cigarette while plugging new music Nobody Is Listening. One fan asked of his live stream: ‘Why is Zayn getting high and blasting lights and music at 6am when he supposedly has a baby in the house?’

Riz: Covid shouldn’t be a hitch to getting married

Getting married in lockdown is as good a time as any, says The Night Of star Riz Ahmed.

Riz, 38, who tied the knot with novelist Fatima Farheen Mirza at a socially distanced bash, said: ‘I think Covid has been a massive accelerator.’

The Wedding Planner… J-Lo’s bids to tie the knot

It should be third time lucky for J-Lo … her fiancé Alex Rodriguez is determined they will wed soon.

Alec Baldwin has quit Twitter over the reaction to his wife Hilaria pretending to be Spanish.

SNL’s Trump impersonator, 62, tweeted for the last time: ‘Twitter is like a party where everyone is screaming.’

Hilara has said of the backlash: ‘I don’t really understand why it’s turning into such a big thing…I’m getting attacked for being who I am…people wanting to label me Spanish or America, can’t it be both?’

How to cope in lockdown, by feel-good Phoebe…

Supporting the Every Mind Matters campaign, Phoebe, 25, suggested ‘a long walk or breathing exercises or just putting on some calming music and doing a jigsaw’.