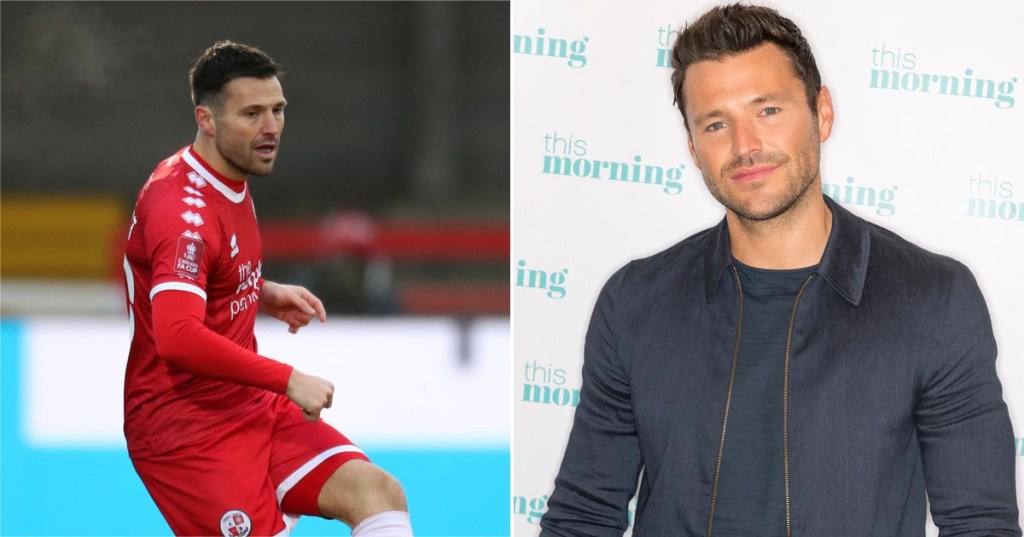 Mark Wright has confessed he ‘lives with the regret’ of ruining his own career as a professional footballer.

The reality star turned radio DJ, 34, has been busy making a comeback on the pitch, after deciding to give football another shot and signing with League Two team Crawley Town F.C.

He made his debut for the club against Leeds United, after previously hanging up his boots at just 20 years old.

Looking back at his early days as a footballer, Mark admits that he is to blame for his career in the game not taking off, as he screwed up his chances by spending a summer partying overseas.

Speaking to Radio Times, Mark confessed that he let his fitness slip during a holiday to Spain that ultimately saw him let go from Tottenham Hotspur – where he had been captain of the youth team.

Mark explained: ‘I ruined my own career and getting released by Tottenham is a trauma that’s stayed with me.

‘I’ve lived with regret for the last 15 years, but it’s also made me realise that I can’t let myself do that again.’

While Mark may have started out in football, fans know him best for appearing on reality TV, with the star making his debut on Towie when it first aired in 2010 and going on to appear on much-loved shows I’m A Celebrity and Strictly Come Dancing.

Addressing the stigma that comes with reality TV, Mark insisted that it’s not easy opening up your life in such a public way and moving on with your career.

‘Starting out on a reality TV show does come with a stigma. The minute somebody does one, they apparently have no talents,’ he said.

‘But, I beg to differ. It’s not easy to have a camera put in your face and be expected to be entertaining or likeable.’

Since his Towie days, Mark has gone on to become a radio host on Heart FM, presenting the station’s Thursday evening show and Sunday afternoon show.

He has also turned his attentions to fitness and launched his own fitness app and site, Train Wright, alongside his brother Josh Wright, who is also a footballer and plays for Crawley Town.

Their venture has landed Mark his own gym-inspired series on BBC Two titled Workout the Wright Way, which will air on weekday mornings, as well as his own mini-series on BBC iPlayer following his return to football.

Workout the Wright Way kicks off Monday January 25 on BBC2, while Mark Wright: The Last Chance is available to watch on BBC iPlayer.


MORE : Glenn Hoddle reveals cardiac arrest inspired him to sign up for The Masked Singer: ‘I am lucky to be here’