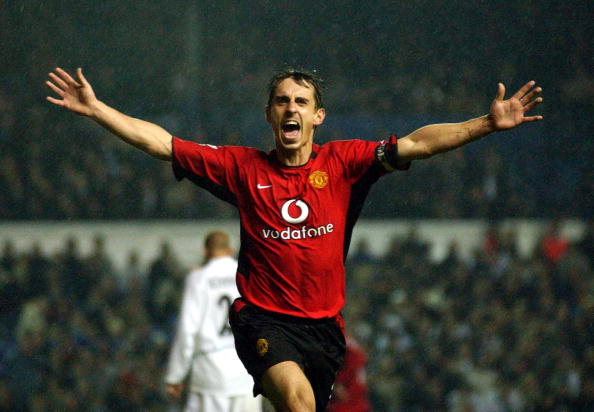 Gary Neville has picked out Wayne Rooney as the best striker he ever played with during his long and wildly successful time at Manchester United.

Rooney recently announced his retirement from playing at the age of 35 as he becomes the full-time manager of Championship side Derby County.

Neville was reflecting on his former Manchester United teammate’s career, now it has come to an end, and came to the conclusion that he was surperior to any other centre forward he played with.

The former full-back listed a string of other strikers he enjoyed as teammates, failing even to mention Ruud van Nistelrooy, which shows just how highly he rates Rooney.

‘For me he was the best centre-forward I ever saw at Manchester United and ever played with,’ Neville told Sky Sports.

‘I have him number one, up front, Cristiano Ronaldo alongside him in every single of the best Manchester United teams that I played alongside.

‘That’s the highest compliment I can pay him, because I played with [Eric] Cantona, with [Mark] Hughes, with [Dwight] Yorke, [Andy] Cole, [Teddy] Sheringham, [Ole Gunnar] Solskjaer, [Dimitar] Berbatov, [Carlos] Tevez, great strikers from all over the world, not just in England.

‘Rooney would be my number one.’

Rooney finished his epic career as the record goal-scorer for both Manchester United and England, but Neville says it was not just his ability to find the back of the net that made him stand out.

‘The contribution to the team at all points of every game was unbelievable,’ the 45-year-old explained.

‘In and out of possession, in the dressing room, the energy every single morning.

‘He was an absolute livewire, street fighter, tough, score goals, assist goals, the best defender, never give in.

‘Everything you would want in a footballer he was there, and to me the best striker I played with because he did everything.’


MORE : Arsenal’s Emile Smith Rowe names Manchester United star he looks up to as a player