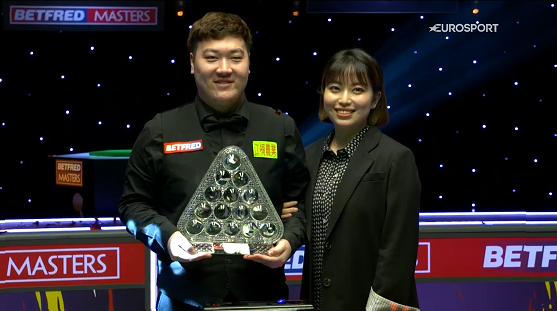 Ronnie O’Sullivan believes Yan Bingtao’s Masters title is reminiscent of when snooker legends like Stephen Hendry, John Higgins and Mark Williams first claimed a major trophy, because you knew there would be many more to come.

The 20-year-old beat Higgins 10-8 in Sunday’s final at the Marshall Arena in Milton Keynes, producing a superb, battling performance to down the 45-year-old two-time former champion.

Yan was on his Masters debut this year and produced an incredible run of results, beating Neil Robertson, Stephen Maguire and Stuart Bingham before seeing off Higgins in the finale.

The Rocket was suitably impressed by the young Chinese star and is in no doubt that Yan will be adding plenty more trophies and big cheques to his collection after trousering £250,000 this weekend.

‘Not just to see a new winner but someone that you think he’s going to go on and win a lot more.

‘It’s like when Hendry come along, them type of players, John Higgins, Mark Williams, you thought, “this could go on for a while.”

‘To do it young and in the manner he does, it’s been a fantastic tournament and he’s done it the hard way, he’s had the hardest draw you could possibly get.’

Immediately talk has turned to whether Yan can become the first Chinese player to win the World Championship title, with flag bearer Ding Junhui, so far, unable to do so in his glittering career.

There is still plenty of time for Ding at just 33-year-old, but O’Sullivan now gives Yan a better chance of beating his countryman to the biggest prize in the sport and expects him to triumph in Sheffield at least once.

‘I think he’s got more chance of doing it because he’s got a lot more time on his side,’ Ronnie said of Yan surpassing Ding. ‘I think it’s a good time to be coming into snooker.

‘It’s hard to say because there might be another three or four come out the woodwork in one or two years and we might be saying the same about them.

‘But at the moment he is the most mature, we’ve seen him do it under extreme pressure and you need to be able to perform under pressure to win the Crucible.

‘I’d be very surprised if he doesn’t win at least one or two world titles.’

Gracious in defeat, Higgins also predicted that Yan would claim the sport’s biggest prize, in fact he said it is guaranteed.

‘Definite world champion, without a shadow of a doubt,’ said the Scot. ‘China’s very lucky to have Yan as a player.’