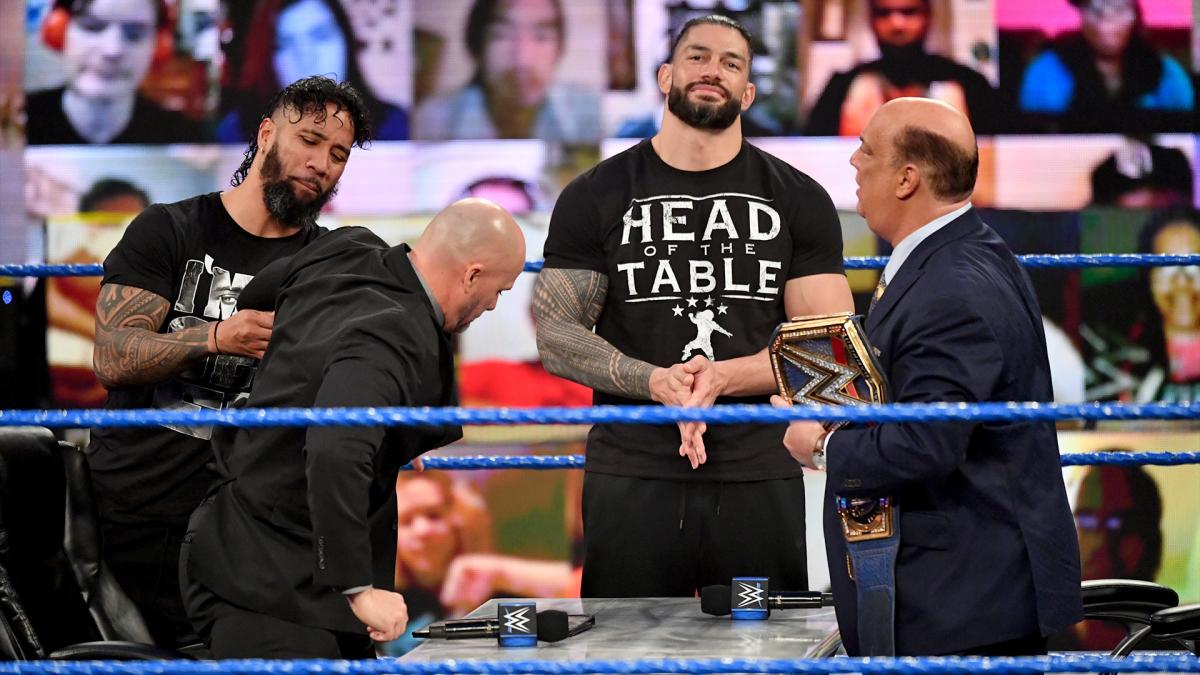 However, by the end of the night it was Scrap Daddy having the last laugh after outsmarting the Tribal Chief and his counsel and bringing Kevin Owens into the fold.

At the beginning of the show, Jey Uso warned Pearce and declared his only entry into the Men’s Royal Rumble match while promising to win and go to Raw to challenge Drew McIntyre.

He then turned his attention to Shinsuke Nakamura, who interrupted the former tag team champion with his original babyface theme music, referring to him as Roman’s puppy and booting him before the match began.

With Cesaro on commentary making excuses for not helping his partner last week, Nakamura was in fine form as he picked up a win over Uso in a fun match.

Elsewhere, Roman also made his presence known as Apollo Crews joined him in his locker room to get some tips before taking on Sami Zayn with IC Chap Big E watching on from a ringside sofa.

Crews looked great in this, eventually grabbing the victory with a handful of tights before lobbing the belt at Big E and trash talking.

Finally, the main event segment saw Reigns bullying Pearce into signing the contract for a Last Man Standing Match at the Rumble before putting his own name on the dotted line.

However, Adam appeared to have a plan as he feigned a knee injury and invoked the ‘card subject to change’ clause and introduced Kevin Owens as his replacement.

Getting away from anything Roman Reigns related, there was even more to enjoy across the rest of the night.

Billie Kay was again at ringside – this time alongside Ruby Riott – but she accidentally cost Liv Morgan her match against Natalya.

King Corbin took on Rey Mysterio after the latter’s son Dominik stood up for himself but only found himself attacked too en route to the royal star’s victory with the End of Days.

Hopefully Dominik and his dad can pick up some momentum somewhere, because they could be a brilliant addition to the tag team ranks.

Speaking of the tag division, The Street Profits also addressed their title loss to Dolph Ziggler and Robert Roode as they insisted they were coming for the gold and promised to ‘drop bodies like Blumhouse’.

It seems they’ll face off in an obstacle course on next week’s show, which could be entertaining giving the undeniable talent and charisma involved.

Meanwhile, the undoubted best match of the night saw Cesaro defeated Daniel Bryan clean as a whistle in the middle of the ring.

Dave Bautista offers $20,000 to catch whoever carved ‘Trump’ onto manatee’s back

Put these two out there with some time to work their magic, and this was always going to be a beautiful display.

The Swiss Cyborg’s win was also a nice surprise, and hopefully both Cesaro and Nakamura will find themselves at the top of the card for some time to come.