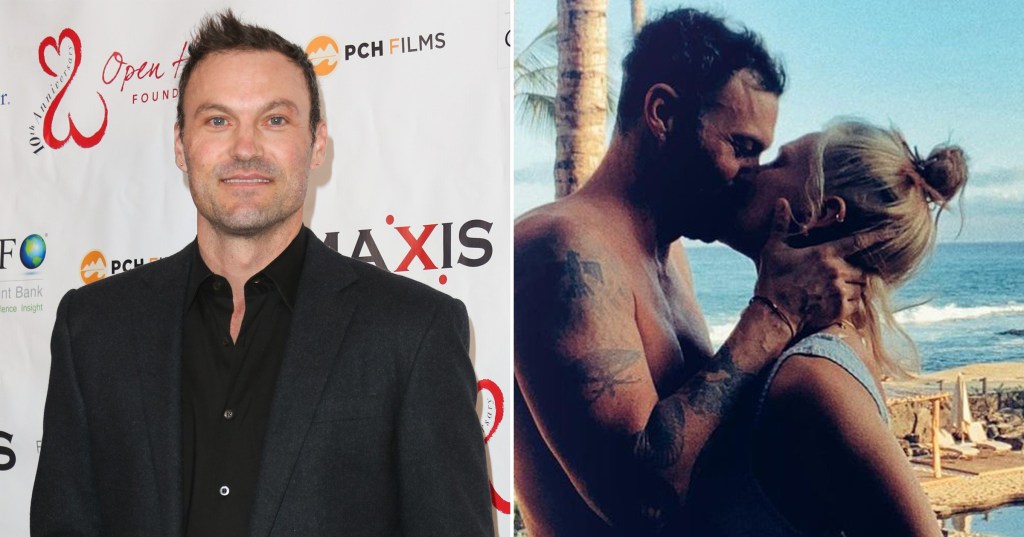 The Dancing With The Stars pro, 35, shared a sweet snap of her and Brian passionately kissing on a balcony during their recent Hawaiian holiday, simply adding the caption: ‘H I M,’ alongside a kiss emoji.

It comes after Brian, 47, recently spoke about their blossoming romance during a chat with Access Daily.

Speaking to Mario Lopez, he revealed that he and Sharna share a business manager who had introduced them to each other.

The actor explained: ‘Yeah, so we have the same business manager and she was like: “Hey, I’ve got a client that you should meet.” And I was kind of in a place of like, you know: “Okay,” and I begrudgingly went and we met.’

Brian admitted that his mind changed upon meeting Sharna as they ‘had great conversation’.

He also spoke about their romantic trip in Hawaii, as saying: ‘We had a great time. We had a really good time.

‘Hawaii is an amazing place and it’s all going really well right now. You know, it’s early on so we don’t have any labels for anything obviously but we’re really enjoying each other’s company, and she’s an amazing woman.’

He added: ‘She’s super responsible and she’s super sweet and caring and compassionate and fun to be around, so I feel blessed right now.’

Brian and Sharna sparked dating rumours when they were spotted together at LAX on Christmas Day, before they were later seen packing on the PDA on their holiday.

He announced his split from wife Megan Fox last May after 10 years of marriage, with the actress officially filing for divorce back in November.

Megan, 34, had previously filed for divorce from Brian in 2015, but they reconciled and welcomed their third child together, Journey, four, the following year, while Megan called off the divorce in 2019.

From ex beef to Instagram spats, the biggest celebrity feuds of 2020

The Transformers star has also moved on, and is currently in a relationship with rapper Machine Gun Kelly – real name Colson Baker – with the two making their first red carpet appearance together at the American Music Awards.

Brian – who also shares sons Noah, eight, and Bodhi, six with Megan – previously hinted he would be open to a future reconciliation with his former partner, but said there was no hard feelings towards her or MGK.


MORE : Victoria Beckham reveals how Sir Elton John inspired her to ‘step away’ from Spice Girls


MORE : Who is Moth on The Masked Dancer USA? All the clues you need to know