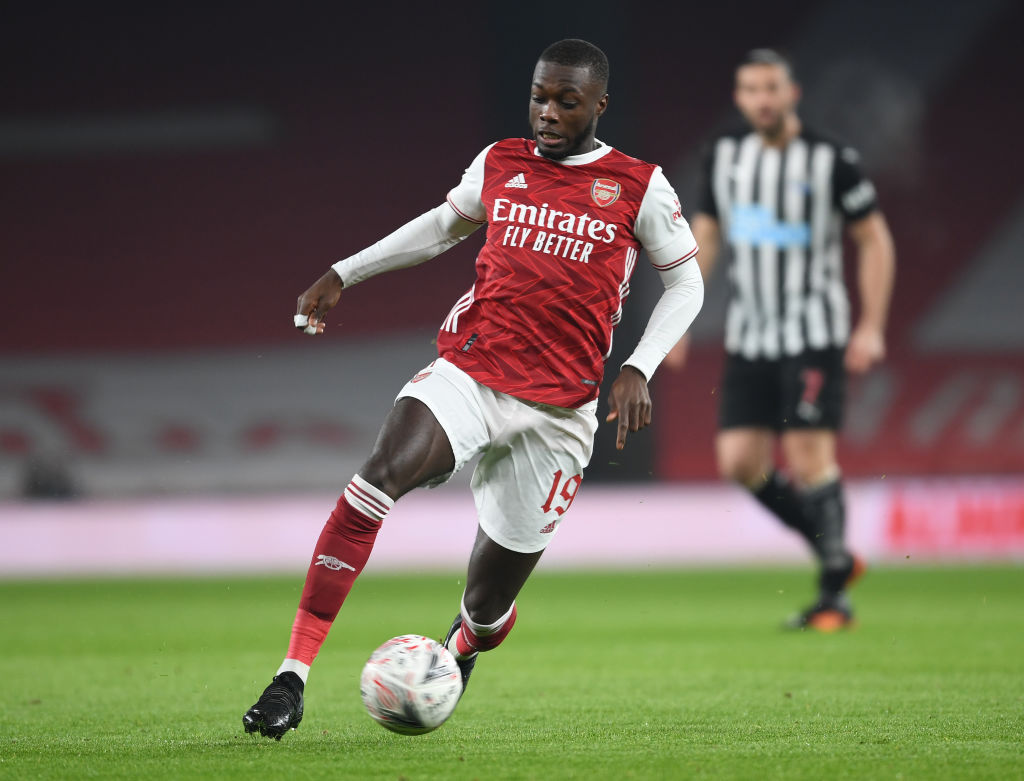 Mikel Arteta praised Nicolas Pepe’s ‘overall contribution’ in Arsenal’s 2-0 win over Newcastle but challenged the forward to prove his doubters wrong by kicking on over the coming weeks and months.

Pepe has badly failed to live up to expectations following his club-record £72million move from Lille back in 2019 and has struggled for regular playing time under Arteta this term, making just four starts in the Premier League.

But Pepe was handed a rare opportunity to impress on Saturday as the Gunners edged past Newcastle to book their place in the fourth round of the FA Cup, with Emile Smith Rowe and Pierre-Emerick Aubameyang netting in extra-time.

And while Pepe once again failed to make a significant impression at the Emirates, Arteta defended the Ivorian’s performance and said he would continue to support him in the second half of the campaign.

‘We need to help him to succeed,’ the Arsenal head coach said.

‘In order to do that he needs minutes, he needs consistency in the team and when he has that, he needs to show he is capable of doing it. Let’s see how the next few months develop.

‘I think it is hard to make judgement on some players that haven’t played many minutes over the last two or three weeks and to throw them in and expect them to be the best player on the pitch.

‘I don’t think it happens and Nico tried. He tried all the game and had some really good moments – moments where he could have scored two or three goals.

‘In a normal circumstance and with his ability in those positions, he puts the ball in the back of the net. He didn’t do it but I think his overall contribution was good.’

Central defender Pablo Mari has been at the heart of Arsenal’s resurgence in recent games and Arteta hailed his fellow countryman’s leadership qualities following the win over Newcastle.

‘We had to throw him in because we had some injuries and suspensions, it probably wasn’t really fair for him because he’s missed a lot of football in the last year,’ the Spaniard added.

‘But he’s a leader, he’s someone that trains really hard, he’s a professional, a great communicator on the pitch and he gives you some security and stability.

‘I think he’s done really well with Rob [Holding], he was really good again today with David [Luiz], three clean sheets in a row and he fully deserves the chance to play.

Covid rulebreakers rescued from mountain after getting stuck in heavy snow

‘He was really positive when he wasn’t playing, when he was injured and when he is playing, he is the same person all the time, trying to help everybody.

‘He’s really professional, really eager to improve to give his best all the time in any capacity and any role and I think he is getting rewarded by his attitude.’