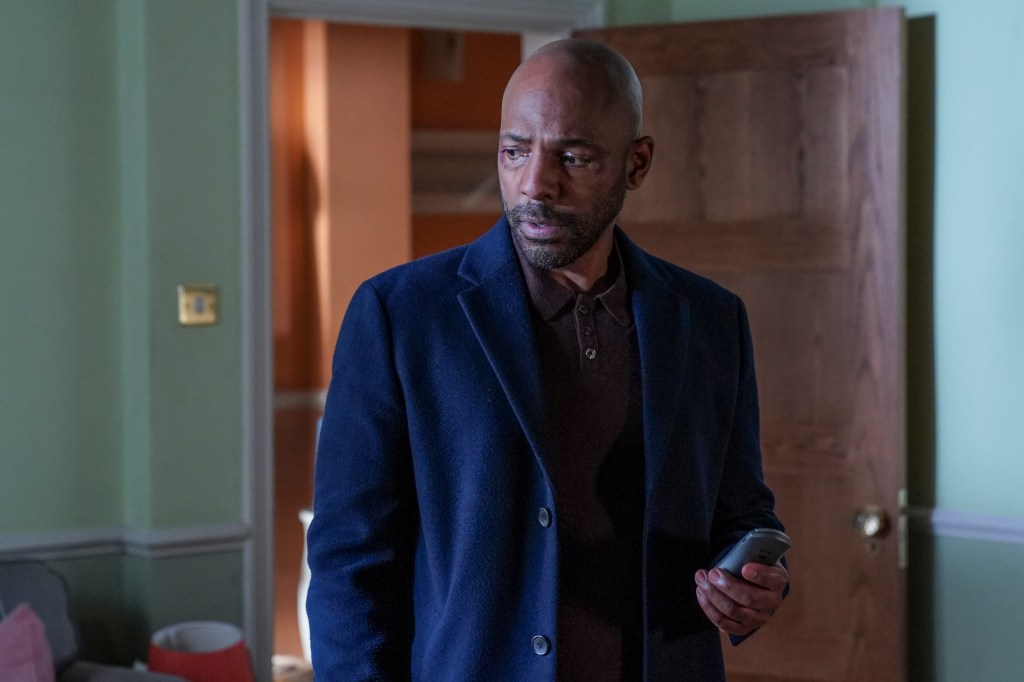 EastEnders’ Lucas Johnson (Don Gilet) has only been back on the square five minutes but he may have already claimed his latest victim with poor Patrick Truman’s (Rudolph Walker) life hanging in the balance.

During tonight’s episode of the BBC One soap, viewers saw Patrick collapse after a heated argument with Lucas ending on a cliffhanger.

Teaser photos ahead of tonight’s episode show a conflicted Lucas looking on at a struggling Patrick with a phone in his hand, seemingly contemplating whether to dial emergency services.

Another shot shows Patrick gripping the chair while clearly in pain.

Will Lucas make the right call?

In the events leading up to the cliffhanger, Patrick recently begged Phil Mitchell (Steve McFadden) for help in protecting Denise Fox (Diane Parish) after Lucas made his grand return to Walford.

The hard-man promised to do as Patrick asked, on the condition that he could spend some time with Raymond Dawkins, the son he shares with Denise.

A reluctant Patrick agreed to Phil’s terms, but he’s struggled under the pressure of keeping the big secret from Denise.

On Thursday night, Patrick took Raymond to the park to enjoy a kickabout with Phil, but Kim (Tameka Empson) witnessed the family affair, and wasted little time in relaying such information to Denise.

Denise was fuming with Patrick, and resolved to move into Jack Branning’s (Scott Maslen). Patrick was heartbroken, but he got an even bigger shock when Lucas turned up on his doorstep and pushed his way into his home.

EastEnders spoilers: What now for Callum as he conceals the full truth from Phil Mitchell?

The serial killer is convinced that Denise was responsible for the attack carried out on him, but Patrick revealed that he’s to blame, before reiterating that he believes Lucas to be an evil man.

However, he ultimately struggled to finish his sentence, and collapsed to the chair — unable to move or talk. Lucas picked up the phone to dial 999 but hesitated leaving viewers desperate to see if he’ll really kill off one of Albert Square’ favourites.

EastEnders continues Friday January 8 at 8:35pm on BBC One.