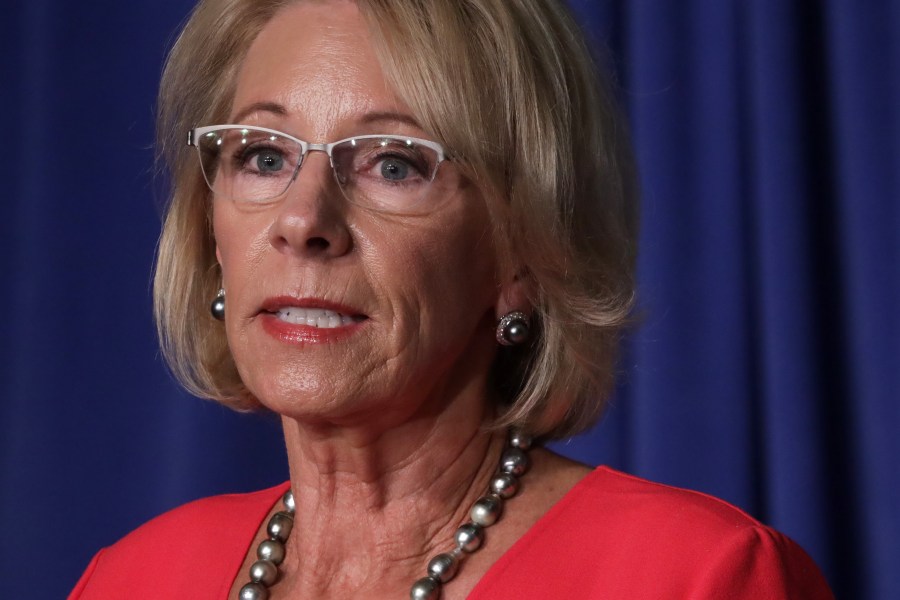 SAN FRANCISCO (KRON/AP) — The list of officials at the White House who are submitting their resignations following the deadly Capitol riots Wednesday continues to grow.

Education Secretary Betsy DeVos has become the second Cabinet secretary to resign a day after a pro-Trump insurrection at the U.S. Capitol.

In a resignation letter Thursday, DeVos blamed President Donald Trump for inflaming tensions in the violent assault on the seat of the nation’s democracy. She says, “There is no mistaking the impact your rhetoric had on the situation, and it is the inflection point for me.”

In a farewell letter to Congress earlier this week, DeVos urged lawmakers to reject policies supported by President-elect Joe Biden, and to protect Trump administration policies that Biden has promised to eliminate.

Senate Majority Leader Mitch McConnell says he has accepted the resignation of Senate Sergeant-at-Arms Michael Stenger a day after a pro-Trump mob stormed the Capitol.

The Kentucky Republican said Thursday in a statement that he had earlier requested the resignation and later received it. He says Stenger’s resignation is effective immediately.

He says, “I thank Jennifer in advance for her service as we begin to examine the serious failures that transpired yesterday and continue and strengthen our preparations for a safe and successful inauguration on January 20th.”

Democrat Chuck Schumer had earlier vowed to fire Stenger when Schumer becomes Senate majority leader later this month if Stenger was still in the position.

The head of the U.S. Capitol Police will resign effective Jan. 16 following the breach of the Capitol by a pro-Trump mob.

Chief Steven Sund said Thursday that police had planned for a free speech demonstration and did not expect the violent attack. He said it was unlike anything he’d experienced in his 30 years in law enforcement.

He resigned Thursday after House Speaker Nancy Pelosi called on him to step down. His resignation was confirmed to The Associated Press by a person familiar with the matter who was not authorized to speak publicly.

The breach halted the effort by Congress to certify President-elect Joe Biden’s victory. Protesters stormed the building and occupied for hours. The lawmakers eventually returned and finished their work.

House Speaker Nancy Pelosi said she received a resignation notice from the House Sergeant-at-Arms, the person in charge of maintaining order in the House side of the U.S. Capitol complex.

Paul Irving was sworn in to the position in 2012.

According to the White House, the Sergeant-at-Arms is the chief law enforcement and protocol officer of the House of Representatives.

Transportation Secretary Elaine Chao is resigning effective Monday, becoming the first Trump Cabinet member to resign in the aftermath of a riot on Capitol Hill.

In a statement, Chao, who is married to Senate GOP Mitch McConnell, said the Capitol riot that came after Trump’s ‘Save America’ rally in D.C. was the reason for her resignation.

“As I’m sure is the case with many of you, it has deeply troubled me in a way that I cannot set aside.”

Chao’s successor will be Pete Buttigieg, who ran against President-elect Joe Biden in the Democratic primaries.

While Chao is the first Cabinet member to resign since Wednesday, four other White House officials have also left their posts.

In a statement, she said that it was an “honor” to serve the country in the White House and be part of he first lady’s “mission” to help children.

Grisham was one of Trump’s longest serving aides, having joined the campaign in 2015. She served as the White House press secretary and never held a press briefing.

White House deputy press secretary Sarah Matthews resigned Wednesday, writing in a statement, “I was honored to serve in the Trump administration and proud of the policies we enacted. As someone who worked in the halls of Congress I was deeply disturbed by what I saw today. I’ll be stepping down from my role, effective immediately. Our nation needs a peaceful transfer of power.”