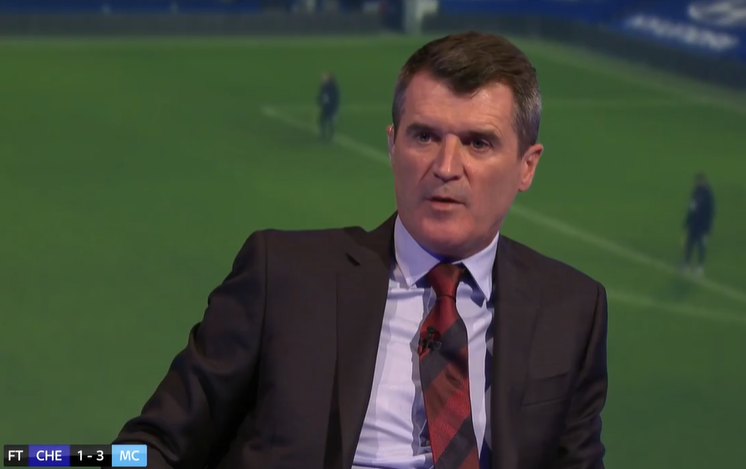 Roy Keane has singled out Mason Mount for his lack of aggression against Manchester City and believes the Chelsea midfielder could have done more to prevent the opening goal in Sunday’s clash.

The west London side are in the middle of a run of four losses in their last six games, with Ilkay Gundogan, Phil Foden and Kevin De Bruyne inflicting another defeat on the Blues at Stamford Bridge.

While City played scintillating football in a ruthless first-half display, former Manchester United midfield Keane was scathing in his assessment of Mount even suggesting he was ‘frightened’ to make a tackle.

Speaking on Sky Sports after the game, Keane said: ‘Mason Mount, he’s standing there as a midfielder getting back. The centre-half has got to do better but Mason Mount is watching him, he’s got to put a challenge in.

‘Frank Lampard will be scratching his head after the game, he’ll be frustrated.

‘When you’ve got your midfielders coming back – and I know Mount is more of an attacking player – but he’s got to put his foot in, make a sacrifice, tackle him!

‘It’s all lovely play from City, nice and tidy, but no tackling from anybody, giving players time and space.

Fellow pundit Graeme Souness suggested Mount had been frightened of potentially giving away a penalty, to which Keane replied bluntly: ‘I think he was just frightened anyway, no matter where it was on the pitch!’

Despite being in top spot a month ago, Chelsea have now fallen to 8th place in the Premier League table after their 3-1 defeat to City and need to find a response in their upcoming matches, with games against Fulham, Leicester and Wolves requiring a big upturn in form.