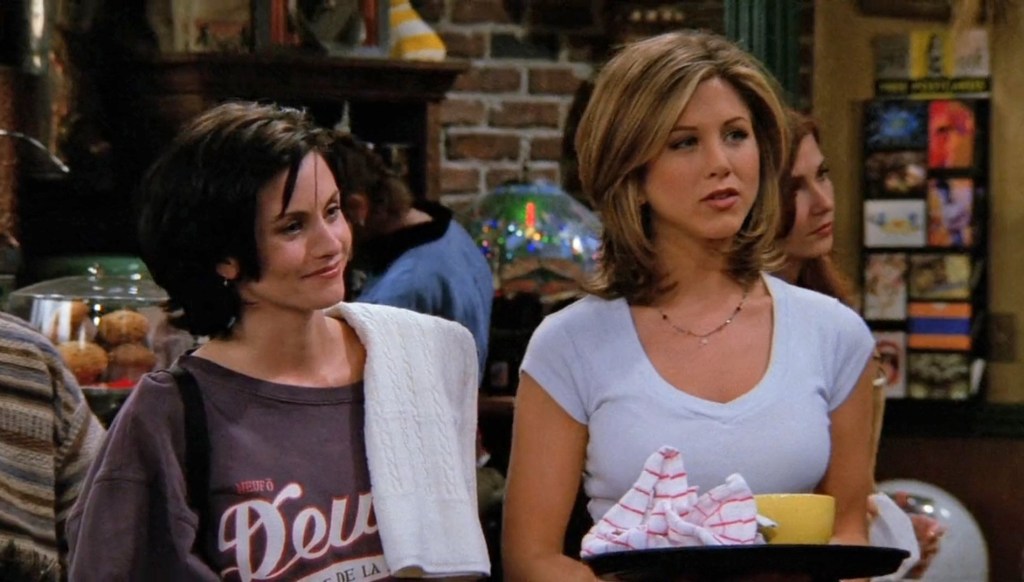 A TV writer has pointed out an accidental Rachel Green blunder during an early episode of Friends, leaving us wondering just how many errors we may have missed throughout the show’s 10 seasons.

No matter how high-end a TV show or film may be, there’s always the possibility that mistakes can slip through the net.

Who can forget the takeaway coffee cup that made its way into a Game of Thrones banquet scene or the time a Stormtrooper was caught hitting his head on a door frame in the 1977 film Star Wars: Episode IV – A New Hope?

Jeffrey Klarik, a TV writer and producer for shows including Episodes, spotted one such mishap in a season two instalment of Friends, in a scene where Rachel (Jennifer Aniston) is taken aback by the news that Ross (David Schwimmer) and his girlfriend Julie (Lauren Tom) are getting a cat together.

In the first of two side-by-side pictures shared by Jeffrey on Twitter, Rachel is captured standing next to Monica (Courteney Cox) wearing a white T-shirt and a necklace while carrying a tray at cafe Central Perk.

In the second shot, her necklace has mysteriously disappeared.

Multiple Twitter users commented underneath the tweet stating that they found not one but several continuity errors by looking at the two images.

The episode in which the continuity error appears happens to be one of the most pivotal in the entire show, as Ross discovers that Rachel has been harbouring romantic feelings towards him.

In the episode’s penultimate scene, the will-they-won’t-they couple share their first real kiss, having actually had their (sort of) first kiss in a season one episode titled The One With The East German Laundry Detergent.

Our favourite celebrity pets of 2020

Jeffrey’s partner is David Crane, one of the co-creators of Friends.

The pair worked together on BBC sitcom Episodes, which featured Friends star Matt LeBlanc as a satirical version of himself.

Episodes premiered in 2011 before coming to an end six years later.

Friends is available to watch on Netflix.