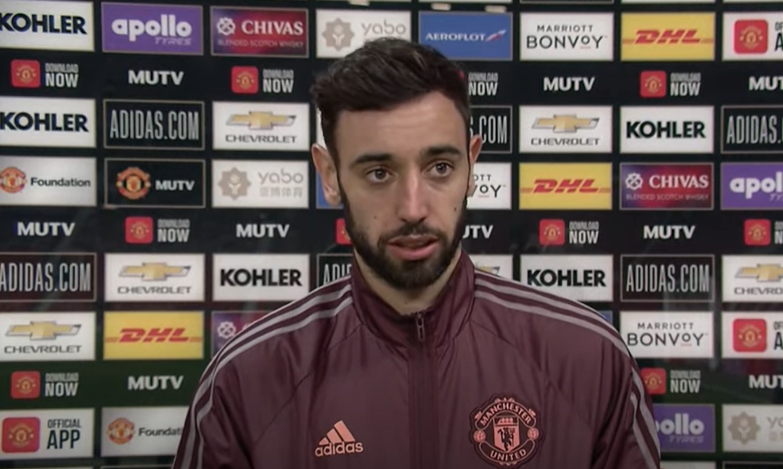 Bruno Fernandes has revealed the ‘mistake’ Manchester United made during their Premier League victory over Aston Villa.

Goals from Anthony Martial and Fernandes helped Ole Gunnar Solskjaer’s side beat Villa 2-1 on Friday night and join Liverpool at the top of the Premier League.

Solskjaer claimed Manchester United had improved ‘immensely’ following the victory and Fernandes agreed with his manager’s comments, but said the team must be more clinical and kill games off.

‘I agree with that because against Leicester we conceded a goal at the end,’ Fernandes said after the Villa win.

‘The only mistake we made today was we had more chances to score again and maybe we have to close the game more quickly. We don’t score the third one and they press us until the end.

‘We knew they [Aston Villa] play really well. They have qualities and are doing well in the league.

‘We did well and created more chances than before but scored less goals. The most important thing is three points though.’

Fernandes scored a penalty to regain Manchester United’s lead at Old Trafford on Friday and has now netted 16 times this season.

He added: ‘I feel like I have to make the penalty go on goal but it’s important to score and it doesn’t matter how.

‘You need to win the games no matter how. I am confident when I take the penalty otherwise I would pass for somebody else.

‘When you dream to play in the Premier League you think of this – the Boxing day and the first day of new year.

‘Everyone wants to be with family but this year was a different one and hopefully next year can be a better one.’

He said: ‘He wants to take the penalties and that’s the first thing. He is never afraid of missing. He has been very safe and is a confident man on the spot.’