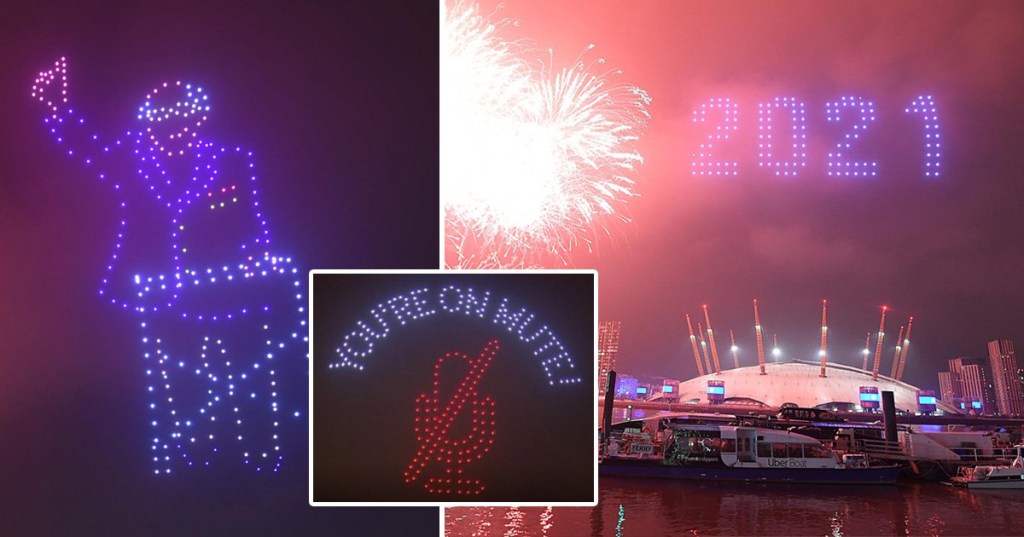 London has bid farewell to 2020 with a futuristic drone display, which highlighted key moments from the year the pandemic changed the world.

The pre-recorded display, which was filmed during the early hours of Tuesday, saw the NHS enclosed in a heart, Black Lives Matter fists raised into the air and Sir Captain Tom Moore’s created out of light.

As Big Ben rang out to signal the start of the New Year, the drones formed a giant 2021 and fireworks went off by the Millenium Dome.

A male voice could then be heard reciting a poem that began: ‘In the year of 2020 a new virus came our way. We knew what must be done, and so to help we hid away.

‘Old habits became extinct and they made way for the new. And every simple act of kindness was now given its due.’

In a nod to some of 2020’s failures, the drones also poked fun at the year’s endless Zoom calls, creating the words ‘you’re on mute’ above the giant image of a microphone turned off.

The display also featured the sound of the British public applauding NHS workers, clips from national news reports, and music by Stormzy and David Bowie. It ended with Sir David Attenborough calling for people to work in 2021 to help our ‘fragile’ planet.

The 10-minute show used more than 300 drones which were flown around the Millenium Dome after the annual fireworks display at the London Eye was cancelled. Last year, more than 100,000 people gathered around Victoria Embankment for the New Year’s Eve tradition.

This year’s display did not take place due to the virus, with three-quarters of England currently in tier four, which prevents people from leaving their homes unless for exercise, work or education purposes.

Elsewhere in the UK, large fireworks displays were also cancelled in Edinburgh, Manchester and Liverpool in a bid to disperse crowds amid Covid restrictions.

However several groups of people could be seen gathered on Primrose Hill in London to watch fireworks go off across the capital’s skyline, despite restrictions not allowing more than two people to meet up outside together in tier four.