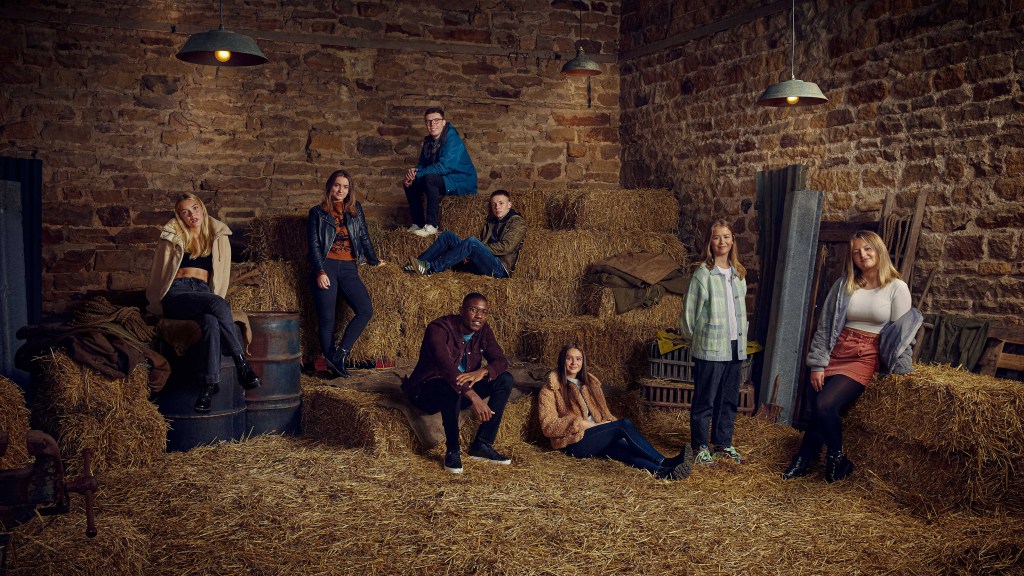 2020 was quite the year for the residents of Emmerdale, but as we bid farewell to one year and welcome in another, the drama will be aplenty once more in the eponymous village.

This time, however, it’s the younger mainstays who will be at the heart of the show.

Liv Flaherty (Isobel Steele), Vinny (Bradley Johnson), Amelia Spencer (Daisy Campbell) and Gabby Thomas (Rosie Bentham) are among those who will have huge stories in 2021.

Executive Producer Jane Hudson said: ‘We are so lucky to have such a talented group of young actors who can deliver some of our biggest storylines.

It’s exciting to watch characters grow up and see how they develop and how their actions shape their futures. And there is plenty of action coming up which will take the young Emmerdale characters on journeys the audience won’t be expecting.’

Vinny is determined to protect his mum Mandy Dingle from knowing the truth about abusive partner Paul Ashdale, but just what does the future hold?

Bradley Johnson tells us: Vinny’s path has been extremely troubling since his dad arrived in the village and he’s constantly being let down and betrayed. He clearly wants to believe his dad will change, but he will find himself on a long, dark and isolating journey.

‘Getting to grips with the character and exploring the abuse Vinny suffers at the hands of his father has been a great learning experience and one I want to do justice.”

Liv is diagnosed with epilepsy in upcoming scenes, and she attempts to come to terms with this, all the while trying to support Vinny, but with Paul making his presence felt, how much can Liv actually intervene?

Isobel Steele said: ‘I’m really looking forward to seeing how Vinny and Liv’s relationship develops naturally and is put to the test. I’m also excited to see how Liv deals with her newly diagnosed epilepsy and how this affects her confidence as a young woman.’

Sarah’s getting up to no good once more, but with Debbie back in the village, will she be able to rein in her young runaway? Or will living for the moment prove too strong for Sarah? And will she resist bad boy Danny Harrington’s charms?

When Sarah lies to protect herself in the coming episode, fallouts and rifts are aplenty.

Katie Hill said: ‘The start of this year is going to be quite an eventful one for Sarah as a lot is going on that will affect her – and she’s left feeling lonely and unwanted.

‘When Danny returns, she sees an opportunity to feel wanted and cared for by someone again. However, as we know, Danny has a dangerous past with drugs. Will Sarah get dragged down this path again?”

Ethan’s world will be turned upside down when he comes into contact with Sarah Sugden. As a result, he ultimately finds himself on the wrong side of the law and with some explaining to do to his father, Charles — aka the new vicar.

Emile John explains: ‘Ethan’s arrival is far from quiet and he soon finds himself at the mercy of the Dingles. But that’s not all.

We’ll soon find out more about Ethan and his past which could have huge consequences for others. I’ve loved playing Ethan so far and i can’t wait to see where the character is heading.’

Leanna is pining for Jacob — who has been staying in Portugal — and her friendship with Gabby is strained given everything that transpired with Liam and Leyla. Will the former friends be able to reconcile?

What’s more, will Leanna’s romance withstand the distance of being parted from Jacob?

Mimi Slinger commented: ‘Leanna has found herself quite isolated with Jacob’s absence and she’ll be sure to question whether their relationship is strong enough to last the distance. I love playing Leanna, she has so many layers to her and I’m looking forward to exploring her story further.”

Amelia certainly had a tough year, as she found herself stepping up to become a full- time carer for dad Dan. With money so tight, she ultimately resorted to crime. With a New Year on the horizon, will she be able to rid herself of worries about financial problems? Can she be free from the worries about her father’s health?

Daisy Campbell reveals: ‘I’m looking forward to seeing Amelia grow up and mature over 2021. It would be nice to see her have some happiness this year and for it not be quite as tough going for her.

‘But I love working with my second dad and seeing how Amelia responds to the responsibilities put on her by her dad’s ongoing situation.’

Samson Dingle was forced to leave his girlfriend behind in France to settle back at home with his family. However, he’s soon influenced by Noah. The question is: could there be serious repercussions for him?

Sam Hall explains: ‘It’s great being Samson and part of the Dingles. Sam will take a big risk this coming year by helping his cousin Noah. He might be bringing himself a lot of trouble, only time will tell!”

Gabby’s recent actions resulted in her nearly running Liam’s career, and she ultimately messed up things with Leyla and thus found herself alone once more.

With Laurel and Jai still coming to terms with their recent sad decision, could Gabby set her sights towards Home Farm and handsome Jamie Tate? And could Kim Tate recognise something of herself in this cunning and clever girl?

Rosie Bentham explains: ‘Gabby has had her fair share of trouble over the past year, but if she’s hoping 2021 is going to be a more settled year, she can think again.

‘I’m excited that Gabby is at the heart of the village as she sets her sights on Home Farm and I can tell you this year is going to hold even more drama for Gabby than ever.’