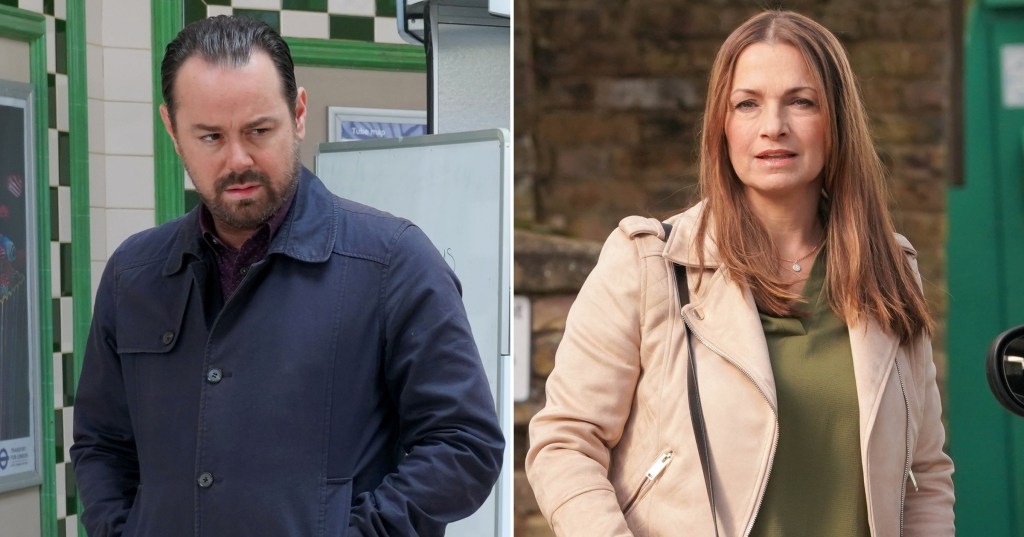 Mick Carter’s (Danny Dyer) sex abuse storyline in EastEnders is set to get even darker, with Katy Lewis (Simone Lahbib) doing whatever it takes to destroy him so her secret doesn’t get exposed.

Viewers have seen Mick spiral into an ever darker place after realising he had been groomed by Katy while he was living in a children’s home, with her daughter Frankie possibly being a child that he fathered when he was just 12 years old.

Mick has not told any of his family members, or his wife Linda, that he was abused by Katy as a child after she tried to make him believe he had made the incident up in his head, but the secret has pushed him into a bad place.

Simone, who plays Katy on the show, has revealed that the manipulative former carer will stop at nothing to ensure he never exposes her for what she is.

She explained: ‘[Katy] uses anything she can to her advantage, so yes, Mick’s fragile state over Christmas is a good thing for her.

‘She wants him to feel isolated, hopeless, and dependent on her, but that’s only part of the way to where she wants him to be to make sure he will never divulge her dark secret.

‘Katy will keep up the mask forever if she has to. It’s all about self-preservation. She doesn’t care about Mick at all.’

The toll the abuse has taken on Mick’s mental health meant he let Linda go without a fight as she began an affair with Max Branning, as he did not have the will left to focus on saving their relationship.

Things are set to get even worse for Mick, with Simone adding: ‘Katy can and will up the ante whenever she feels the need to.

‘She takes advantage of any weaknesses she finds and whilst her victim is “unaware” it’s very easy for her to chop and change strategy, twist and shape shift at will. She’s covert and very good at what she does, awful though that sounds.’

Simone says the role has been a tough one to play, adding: ‘[Female perpetrators of sex abuse] aren’t as prevalent as male perpetrators, but they do exist and so, yes, even more reason to bring awareness since we are less likely to suspect a woman of paedophilia.

‘I’ve found it very interesting and challenging. She is unlike any other character I’ve played, I tend to be offered strong but vulnerable character who are fairly earnest.

‘Katy is much more complex, damaged and dark. Where other characters I’ve played have been emotional and from the heart, Katy’s all from the head. Very clever and quick thinking.

EastEnders spoilers: Katy will do anything to destroy sex abuse victim Mick

Is Tina leaving EastEnders and does she die?

‘She grooms people, gains trust, extracts information then uses it to manipulate them. She wants to confuse Mick to the point he can’t trust his own memories, make him feel he can’t trust anyone else either, except her, so as to isolate him and make him easier to break down.

‘Mick is a danger to Katy and she has no conscience about doing anything she feels she needs to protect herself.’