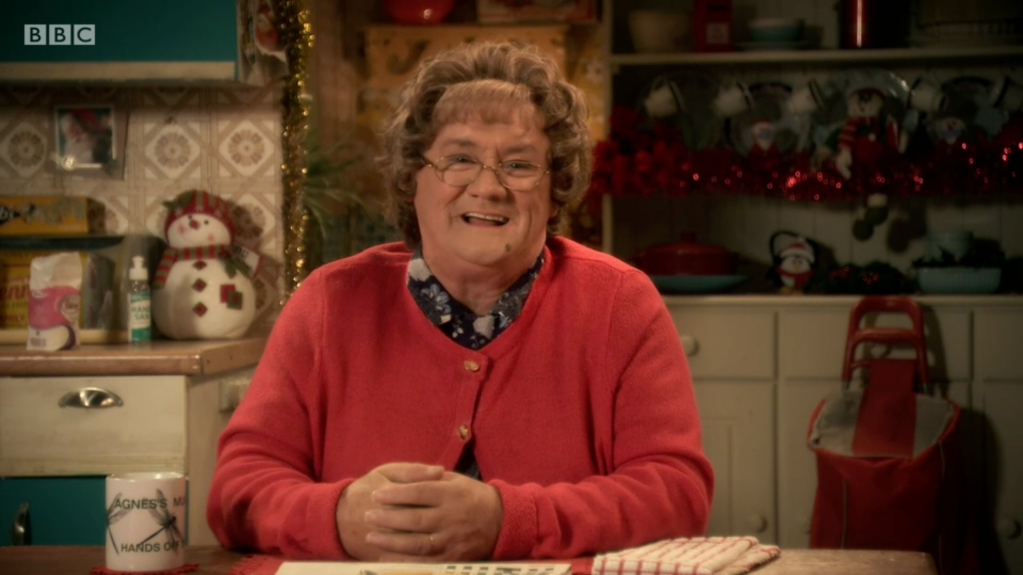 The Mrs Brown’s Boys Christmas special ended on a poignant note this year, with star Brendan O’Carroll paying homage to the ‘heroes in our lives’ and promising that ‘comedy will always give us a lift’.

At the very end of the episode, which tackled the coronavirus pandemic, Agnes Brown (Brendan) sits down at the kitchen table, facing the camera.

The matriarch acknowledges that this year has been ‘s**t’, explaining that while she hasn’t been able to hug her grandchildren for a long time, ‘they have FaceTimed me every day’.

Mrs Brown pays tribute to all those who have kept essential businesses running throughout the Covid-19 outbreak, individuals that she admits she ‘used to take for granted’.

‘People I used to take for granted. I hope I never do again.’

In the speech, Mrs Brown addresses the efforts that were made to ensure the festive instalment of Mrs Brown’s Boys could go ahead, stating: ‘Nothing would stop us, because in the middle of all the chaos and hurly-burly that’s come at us, this year we need a laugh.’

‘It’s been tough. Some days, instead of going forward, it felt like we were swimming through porridge,’ she says.

Paying tribute to several big names in comedy, including the late Ronnie Barker, Catherine Tate, Jimmy Carr and hit sitcom Derry Girls, Mrs Brown stresses that ‘comedy will always give us a lift’, adding: ‘You can be sure of it.’

Several Mrs Brown’s Boys viewers praised the show on the ‘heartfelt’ speech, which was followed by a performance of I’ll Stand By You by The Pretenders.

‘Now that was a great episode of #MrsBrownsBoys. Just what the Dr ordered. The speech about the year was very heartfelt,’ one person tweeted.

‘#MrsBrownsBoys that speech was so true… A lot has hit home this year and it’s been majorly tough,’ another said.

Someone else acknowledged that while the programme ‘isn’t for everyone’, the closing speech ‘was emotional and brilliant’.

‘The speech on #MrsBrownsBoys was really touching,’ another fan remarked. ‘It’s been a long a** year for sure and yes it’s great that the unsung heroes are getting recognition.’

In March, Brendan, 65, expressed his hope that Mrs Brown’s Boys would continue to ‘keep people laughing’ throughout the pandemic.

‘People are scared. People are afraid of things like coronavirus and the state of the world. When they get scared they get nostalgic,’ he told the Irish Mail at the time. ‘Mrs. Brown is in tune with that.’

The Mrs Brown’s Boys Christmas special is available to watch on BBC iPlayer.