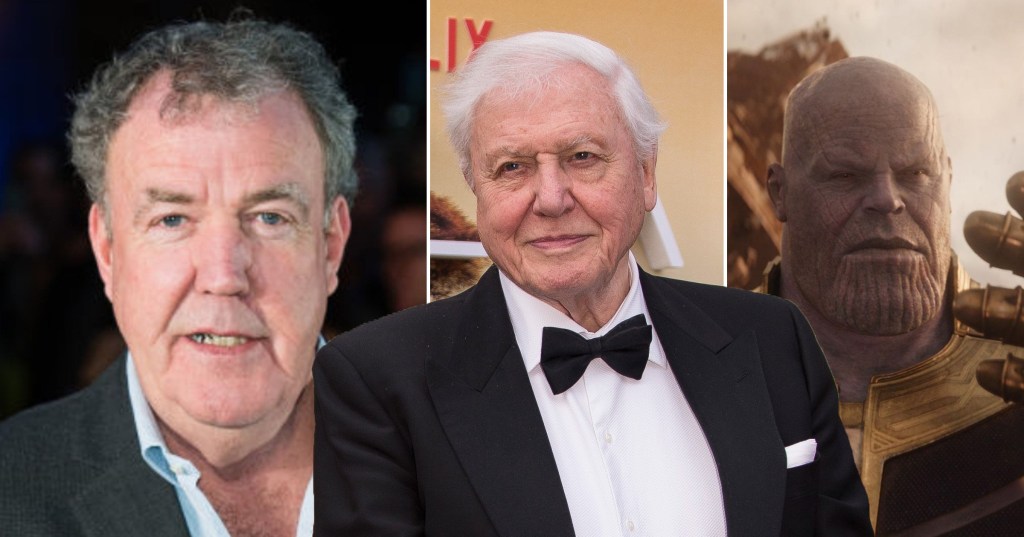 Jeremy Clarkson has given his take on TV in 2020 – and summed up a mad year by comparing Sir David Attenborough to Avengers character Thanos.

The Grand Tour presenter brought his dry wit to the year’s telly as he hosted his Christmas special Clarkson On TV, and he certainly had some strong opinions.

One of the most bizarre was his take on Sir David, who he asserted has been constantly ‘telling us off’, with the one-off special sharing a clip from the environmentalist’s film A Life On Our Planet.

Sir David is heard speaking about the dangers of overpopulation, with Jeremy joking that his ideas sounded a bit too similar to villain Thanos’s in the Avengers movies.

In Avengers: Infinity War, Thanos, played by Josh Brolin, is seen wiping out half the population with a snap of his fingers.

‘To get rid of Thanos, they assembled all the Avengers to kill him,’ Jeremy asserted, before quipping: ‘David Attenborough, meanwhile, got knighted!’

Marvel villains aside, Sir David is set to release his upcoming documentary series A Perfect Planet in January, and it looks absolutely breathtaking.

In a first look trailer, we know we’re in for something good, as he speaks about the carefully laid out world that we live on.

‘They say perfection doesn’t exist, but that’s not quite true,’ he is heard saying.

‘There is one planet where every element has fallen into place perfectly. Planet Earth.’

‘From volcanoes to weather systems, ocean currents to the heat of the sun, these forces have allowed life on earth to flourish.

‘Join me to discover how these diverse forces work together to keep our planet in perfect balance.’

Clarkson on TV is available for catch-up on the ITV Hub.


MORE : Christmas Day 2020 TV guide: What to watch from Jeremy Clarkson to Bridgerton on Netflix