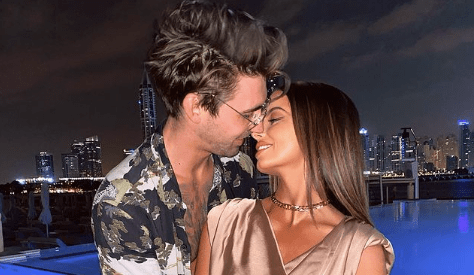 Love Island stars Maura Higgins and Chris Taylor are still going strong after they confirmed they were dating last month.

The new couple, who have been friends for a while, recently jetted off to Dubai – where a lot of Love Island stars seem to be at the moment – for some winter sun and are now looking forward to Christmas together.

Maura praised her boyfriend in a loved up Instagram post, sharing a sweet photo of them cuddled up on their holiday.

The Irish reality TV star wore a white T-shirt and blue denim shorts, resting her head on Chris’ shoulder as they posed for the picture.

Chris, wearing a black top and jeans with a black jacket, gently held Maura’s waist while she rested her hand on his.

In the caption, she wrote: ‘I already have what I want for Christmas…It’s you’ and tagged her man in the post.

She went on: ‘Merry Christmas Eve to all of my family, friends & followers❤️ My sincere sympathy goes out to those who are spending Xmas alone or have lost a loved one during this time…stay strong.’

Chris wrote in the comments: ‘YOU KNOW HOW PRONE TO CRYING I AM!!! Love you my little weirdo’.

The Love Island star said he ‘fell in love with my best friend’ when the pair revealed they were in a relationship last month.

They had previously brushed off being any more than friends, with Chris claiming on Vicky Pattison’s podcast The Secret To: We’ve never really thought about it like that, we’re just super close mates.

‘She’s Irish and it’s the Irish banter and that’s my kind of banter. If you were around us together you’d think, “these two f**king hate each other,” we don’t.

Maura Higgins pokes fun at epic fail that lost contestant £10,000 on The Wheel

‘We like each other and the thing is, it’s never been something that’s crossed our minds and it wouldn’t happen for the fact that we don’t want to ruin our friendship.’

Chris and Maura had met on ITV2’s Love Island in 2019 but Maura had coupled up with Curtis Pritchard while Chris briefly dated Harley Brash.


MORE : Gavin and Stacey: Will there be a new Christmas special? Fans demand answers