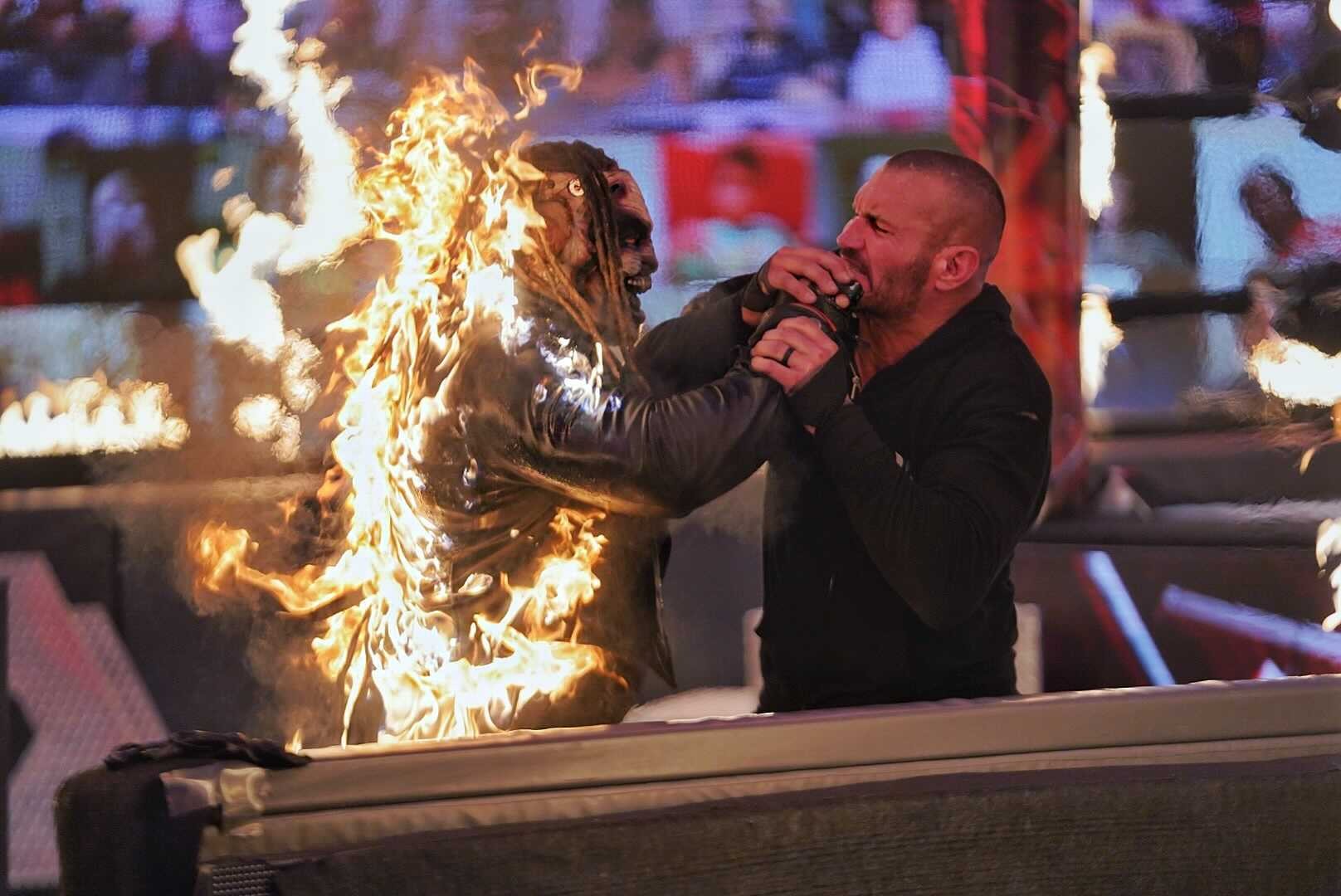 WWE TLC: Tables, Ladders and CHairs ended in the most shocking way possible as Randy Orton burned The Fiend alive in their Firefly Inferno match.

After a stellar card showcasing the best the company has to offer, the main event promised something very different as the Legend Killer and Bray Wyatt’s twisted alter ego more than delivered in the outlandish way only pro wrestling can.

With podiums and pillars of fire littered across the ThunderDome, Orton and The Fiend used the environment to its fullest as they brought a horror movie to life for WWE fans watching around the world.

Randy’s attire – jeans and a hoody, a rarity for the 14-time World Champion – but the result in serious doubt, and there were genuine gasp-out-loud moments throughout, with Bray setting a strap on fire in an attempt to win.

In a particularly creative moment, he lit a spark running right up to his former character’s rocking chair, only for Orton to escape at the absolute last minute.

For a moment, it looked like Wyatt was going to pick up the win as he locked his foe in the Mandible Claw and pushed him towards the flames, but Randy was able to reverse it and set him alight.

That wasn’t the end though, as The Fiend – still standing – got back in the ring, running into an RKO before he got dowsed with lighter fluid and set alight in the middle of the ring.

WWE had a lot to live up to with the stipulation and they exceeded those expectations, while presenting a genuine cliffhanger for tomorrow’s episode of Monday Night Raw.

How will Orton be changed by his clash with pure evil, and where does Bray’s fearsome alter ego go from here?

In the opening WWE Championship TLC Match, Drew McIntyre overcame the odds in a violent, brutal and simply fantastic clash with AJ Styles.

There were some creative uses of the environment, with a surprise cash-in from The Miz leading to Omos getting involved, including a glorious moment when John Morrison literally broke a chair over his back.

In the end, it was Drew who picked up the win to retain the gold and get the show rolling in style.

The second match was a change of pace but built to an epic crescendo as Sasha Banks retained her Women’s Title over challenger Carmella.

Despite a losing effort, the latter looked brilliant here, and the addition of Reginald will let her shine under her new guise.

The Raw tag division wasn’t about to be overwhelmed by the previous two matches, and Hurt Business captured the titles in a fast paced match with The New Day.

Cedric Alexander tagging himself in to hit the Lumbar Check for the win was a lovely touch, and the faction is now dripping in gold – exactly how it should be.

We moved onto the Women’s Tag Team Championships next, as Charlotte Flair returned as Asuka’s mystery partner to battle Shayna Baszler and Nia Jax.

In storyline terms, Jax was responsible for putting the Queen on the shelf so her comeback made perfect sense, and she hit the Natural Selection to win the gold in a brilliant tag team bout.

The end game for both tandems will surely be feuds for the former partners, and that should allow all four to shine in different ways.

Somehow, the best was yet to come as Kevin Owens and Roman Reigns collided in an all-out battle for the ages in a TLC Match for the Undisputed Title.

KO immediately attacked the Tribal Chief to get an early advantage, taking out Jey Uso a number of times during the match as it almost seemed like he might actually topple the champion.

No one has looked this strong against Reigns since his return, and it should mark a career rejuvenation for Owens when it comes to his spell as a main event star.

Roman won in the end, but it took multiple distractions, a low blow and the guillotine to finally put his challenger away.

A cracking end to WWE’s PPV calendar, with the road to the Royal Rumble – and thus WrestleMania – fast approaching.