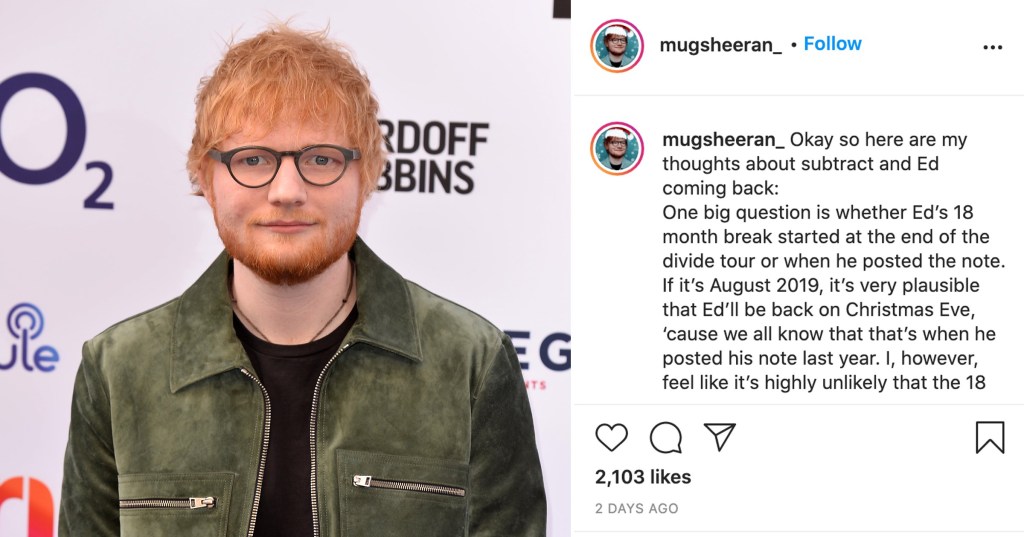 Ed Sheeran has fans in a frenzy about new music after he replied personally to a few supporters.

The ginger crooner hinted that one fan theory might be right after they took to their fan account with a post about Ed making a comeback.

Ed announced last August he was taking an 18-month break from music to spend time with his wife Cherry Seaborn and daughter Lyra, and made another announcement about a break last Christmas eve.

So the fan did some mathematical sleuthing and concluded the hiatus could soon be coming to an end.

They wrote: ‘Okay, so here are my thoughts about subtract and Ed coming back.

‘One big question is whether Ed’s 18 month break started at the end of the divide tour or when he posted the note. If it’s August 2019, it’s very plausible that Ed’ll be back on Christmas Eve,

‘Cause we all know that that’s when he posted his note last year. I, however, feel like it’s highly unlikely that the 18 months started at the end of the divide tour.

‘I first of all think that it’s too early for Ed to come back. Like he hasn’t even been able to travel that much bcs of the rona and Lyra was only born about 4 months ago, so I reckon that he wants to spend some more time with her and Cherry.

‘Stuart said in the podcast that subtract is probably gonna come out around August 2021.

‘If they’re still planning on releasing it then, I just see no point in Ed already coming back in December yk. If his break started after his note, it would normally end in June 2021.’

Subtract and Minus are two of the rumoured names for Ed’s next release.

The fan went on to congratulate Ed stans for surviving ‘a whole year without our fluffy bean bear.’

It could have ended there, but it seems a certain musician was lurking in the comments, ready to send shockwaves with one little message.

Ed replied: ‘All very valid questions, but youl [sic] know at least one answer soon’ and later a second message with just a yellow heart.

One fan was so stunned they replied in all caps with: ‘OMG you didn’t just do that wtf is going on ahhh you can’t just play us like that!’

Ed Sheeran donates £10,000 to hospital that cared for his late grandmother

And another wrote: ‘I am freaking out omg’ with three crying emojis.

But perhaps no one was more shocked than the original sleuth, who updated their bio to read ‘ED COMMENTED ON MY POST SEND HELP PLS.’


MORE : Ed Sheeran donates £10,000 to hospital that cared for his late grandmother