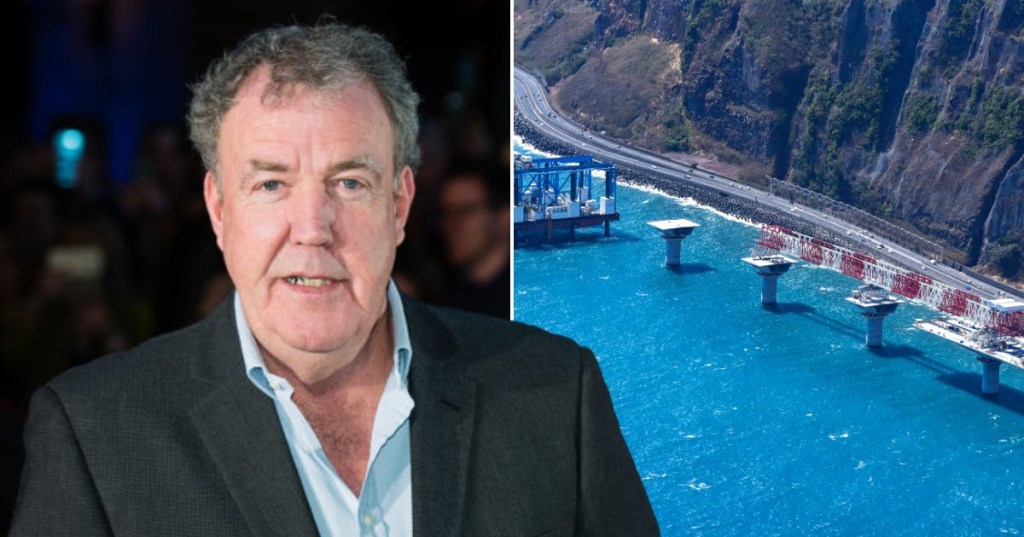 It’s one of the most divisive subjects in British history, but Jeremy Clarkson reckons he might have finally worked out why Brexit happened – and it’s not what you might think.

The presenter was speaking about the upcoming Grand Tour special, A Massive Hunt, which is released on Amazon Prime Video next month.

Jeremy and co-presenters James May and Richard Hammond were the first to drive on the world’s most expensive road around the Indian Ocean island of Réunion, which he described as ‘vanity project’ and waste of EU money.

Réunion is an overseas department of the French Republic, found off the coast of Madagascar. The trio drove on the road which connects the cities of Saint-Denis and La Possession and rises out of the sea. It cost more than $2 billion (£1.5 billion) to build.

‘We were the first people ever to drive on it,’ Jeremy said about the road. ‘It’s extraordinary that you can fly for 13 hours and then land – still in France, that’s astonishing in itself – and then it’s astonishing to see the EU at work.’

He added: ‘I was a Remainer and a fervent believer in the EU and what it stands for, but when you see something like that you just think “Oh for heaven’s sake, no wonder Brexit won when we’re spunking this much money on a completely unnecessary vanity project on the other side of the world”.

Jeremy did however recognise the road which runs arond the length of the island as an incredible architectural achievement.

‘It’s a fantastic thing to see,’ he said. ‘David Attenborough shows some very extraordinary things, but this road is up there. Man did that, man can be proud of that.

‘It does feel slightly like there might have been an easier solution in terms of fixing the existing roads, doesn’t it? Well, yes but that’s the EU. They just want to keep everyone sweet. While politically it was an idiotic thing to do, from an engineering point of view it’s just fabulous.’

Jeremy, James and Richard explore the islands of Réunion and Madagascar in the new special, which has been a long time coming.

It’s been a year since the last episode of the show was released, and Jeremy Clarkson previously admitted he was as annoyed as fans about the delay.

After one social media claimed they were ‘kind of bored’ waiting for the episode, Jeremy replied by saying: ‘Me too.’


MORE : Jeremy Clarkson claims bees are ‘out to get him’ as he’s stung on the bum on his farm