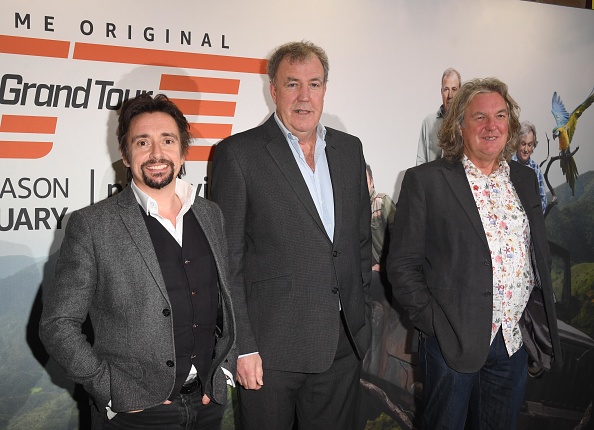 The Grand Tour is finally returning for the long-awaited special A Massive Hunt in December, but Jeremy Clarkson has revealed that filming almost didn’t happen after the presenters narrowly avoided a shark attack.

Jeremy explained how Richard Hammond’s poor understanding of French nearly caused them to be attacked during a dip in the Indian Ocean.

The presenter said: ‘When we were in Réunion we had a day of sorting ourselves out and we all met on the beach and Hammond suggested snorkelling.

‘So, [Richard] went off to the little hut where you could borrow the flippers and snorkels and he came back and he said, “My French is really coming along, I’ve just had a long conversation with the man in the hut in French.”’

Jeremy added: ‘We then went swimming and snorkelling and when we got back, we were told that the day before, a man had been eaten by a shark. Exactly in that spot, off that same beach, inside the reef where we were snorkelling.’

‘So, this French man was clearly saying, “Don’t go swimming” and Hammond was saying “I like to go snorkelling on Wednesdays.” Half of the world’s shark attacks are off Réunion and we went swimming there like idiots.’

He added: ‘Everyone on the beach was staring at us like, “What on earth are they doing…?” And this was all because Richard Hammond thinks he can speak French.’

Jeremy, Richard and James May explore the islands of Réunion and Madagascar in the long-awaited special, which arrives next month. The new journey begins on the most expensive road in the world, which Jeremy believes may go some way to explaining Brexit.

A close encounter with sharks was the only hardship the presenters faced during filming either, with Richard suffering an unfortunate injury during the shoot.

‘If Hammond says he burned his bits with a hot ready meal in Madagascar then he really did,’ Jeremy said.

‘He really did burn his b******* with an army ration meal, which was hotter than he expected. That’s a very funny scene.’


MORE : Jeremy Clarkson claims bees are ‘out to get him’ as he’s stung on the bum on his farm