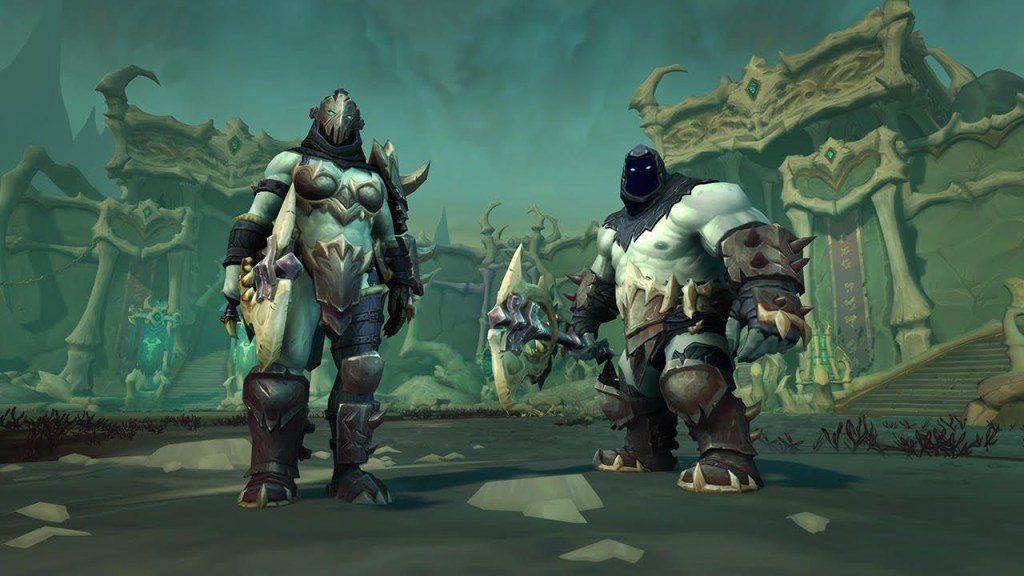 GameCentral takes an early look at the new expansion for World Of Warcraft and how it might appeal to both old and new players.

This week, Blizzard launched World Of Warcraft: Shadowlands, the MMO’s eighth expansion in 16 years. Even after all those expansions there’s still lots to get excited about, with a dark turn of events in the World Of Warcraft narrative that means the game is now literally a matter of life and death. The battle for the souls of the dead is undeniably compelling and we can confirm that so far, it’s also a lot of fun.

The Shadowlands expansion gives new and returning players a chance to explore four new zones and a new capital city. It’s also designed to make it easier to get at the game’s wealth of new content and ensure the whole experience is as accessible as possible, even for absolute beginners.

Shadowlands itself is World Of Warcraft’s version of the afterlife, with souls being judged and allocated a suitable purgatory depending on their deeds. Everything used to run like clockwork but Sylvanas, a very angry undead lady, and her mysterious partner The Jailer have put a spanner in the works and are sending all souls, regardless of merit, into the hell-like Maw. Naturally, it’s the job of you and other players to stop Sylvanas and help out the various factions that reside in the Shadowlands.

The new tutorial zone is called Exile’s Reach, a starter-player friendly area that avoids any lengthy treks to the Barrens, of the sort that are typical of World Of Warcraft Classic. This will help and encourage players who may feel dumbfounded by the sheer breadth and depth of content that’s built up over eight expansions.

Starter players also get a great expanded choice of character creation options, including new skin, eye, and hair colours, and even more extreme customisations such as the undead being basically a bag of bones and the oversized, cow-like Taurens wearing delicate flowers in their hair. Now is the time to roll that Elemental Shaman with Ghost Wolf form or Goblin Beast Mastery Hunter you’ve been considering for the last 14 years.

Exile’s Reach leads you off the beach, after an unfortunate shipwreck, and into the hills, where starter players get a taste of the fundamentals of World Of Warcraft. Here you can get to grips with the mechanics of the game and the skills of your chosen class/race combination. There’s a little bit of everything here, including ogres, spiders, harpies, and elementals – even a mini-dungeon with a dragon at the end.

The instructions are explicit, which again helps newbies, with Exiles Reach taking about two hours to complete, ending with a swift flight to the capital city of your chosen faction. The scale of Orgrimmar – the Horde faction’s capital – compared to Exile’s Reach can appear overwhelming, especially with so many players milling around in the same spot, trying to start the first quest, but you soon begin to learn your way around.

Bringing new players into the fold, and getting them to sign up for monthly subscription packages, is what allows World Of Warcraft: Shadowlands to keep innovating but Blizzard are conscious that with this expansion everything needed to be streamlined. This is focused in the new level squish, which brings player levels back into double digits, with a new level cap of 60.

There’s also sweeping changes to how you gain the experience that you need to level up, such as waving goodbye to heirlooms (helpful items that granted experience boosts). This overhaul of a fundamental gaming mechanic, combined with being able to choose the zone that you level up in, allows you to experience content from previous expansions in any order you choose.

During the pre-patch storyline it was great to revisit Wrath Of The Lich King zones and Icecrown Citadel, where you’re briefly transported back to meet with Highlord Bolvar Fordragon, who instructs you on how to breach the veil between the living and the dead. The Maw is your introduction to the Warcraft afterlife, where you’ll be attacked from all sides whilst being almost overwhelmed by the appearance of familiar faces such as Thrall, Jaina Proudmoore, and Darion Mograine from World of Warcraft lore.

Take some time to look around and grab some screenshots of this Hellish realm but if you don’t manage to don’t worry, you’ll be back here at level 60 to complete the Shadowlands campaign.

Before that you’ll need to check out Oribos, the new capital city and central hub for this expansion and then travel through each of the four new zones. These quest chains which will help you familiarise yourself with the different covenant in each zone. Covenants are a welcome addition to World Of Warcraft, that act as a sub-class without changing anything too fundamental and add more depth to your character’s personality.

The drought of anima, the lifeblood of Shadowlands, is the theme that ties these zones together and a constant source of anxiety which acts as a suitable progression mechanic throughout the campaign. There are four new zones in Shadowlands and the first stop is Bastion, where you can find the Kyrian – blue angels who are the safe-guarders of souls. It couldn’t be more different from The Maw, with its beautiful crystal castles and an obsession with virtue that isn’t particularly inspiring. There’s already calls for the cute white owl servants to be the next choice for an allied race though.

The next zone is Maldraxxus, which exists in a state of constant military conflict and is home to the Necrolords, who focus on the struggle for power in any form. Towering fungi, slime pools, and a generally fuggy atmosphere make this an undead no man’s land, with three factions pitted against each other in a constant struggle for supremacy and control.

Ardenweald will take your breath away purely by the amount of purple on display. This enchanted forest is home to the Night Fae covenant and ruled by the Winter Queen, somewhat of a Greta Thunberg character. Night Fae are less hippies and more Extinction Rebellion and use the anima to fuel the regrowth of the seeds that contain souls of people that have died in other realms.

If you enjoyed Interview with a Vampire, with Tom Cruise hamming it up, you’ll love the final zone of Revendreth. Here you’ll be tempted to choose Venthyr as your covenant, as they seem to provide some of the best amour for your new Tauren Elemental Shaman, whose oversized shoulders, with Gravestones and Candles on them, would bring out the goth in anyone. This zone is an excellent ending to the campaign and really makes you feel Blizzard have saved the best till last.

These zones form the core of Shadowlands’ content but as you reach level 60, and you soul bind to your covenant, a number of world quests are also introduced and these involve enough different styles of quests to keep you busy long after the main story.

There’s also still a lot of important Shadowlands content that Blizzard is gatekeeping for the next few weeks and will release slowly to dissuade players from speed-levelling to 60. Only three levels of Torghast, the long anticipated procedural instance, are playable at launch, which will frustrate hardcore players who want to collect as much Soul Ash as possible and craft coveted Legendary items.

Over the following few weeks, the rest of the eight levels will be rolled out. Even for casual players these dates are important, as completion is required in order to unlock the Corridor Creeper mount. If you didn’t manage to scrap together five million gold for a Mighty Caravan Brutosaur mount, which is now unavailable, you’ll probably be keen to add this spooky looking hound of Hell to your mount roster.

So far Shadowlands does not disappoint, with the question of which of the four covenants to soul-bind to being a particularly tricky one, as you get to grips with the endgame content of world quests and dailies. Shadowlands is reminiscent of aspects from earlier expansions, such as Wrath Of The Lich King (even including the grind), but it has a style all of its own and a good sense of momentum that, so far at least, makes it great fun to play.


MORE : World Of Warcraft Shadowlands expansion delayed because of coronavirus


MORE : World Of Warcraft: Shadowlands beta starts next week – how to sign up


MORE : World Of Warcraft predicted the coronavirus pandemic 15 years ago