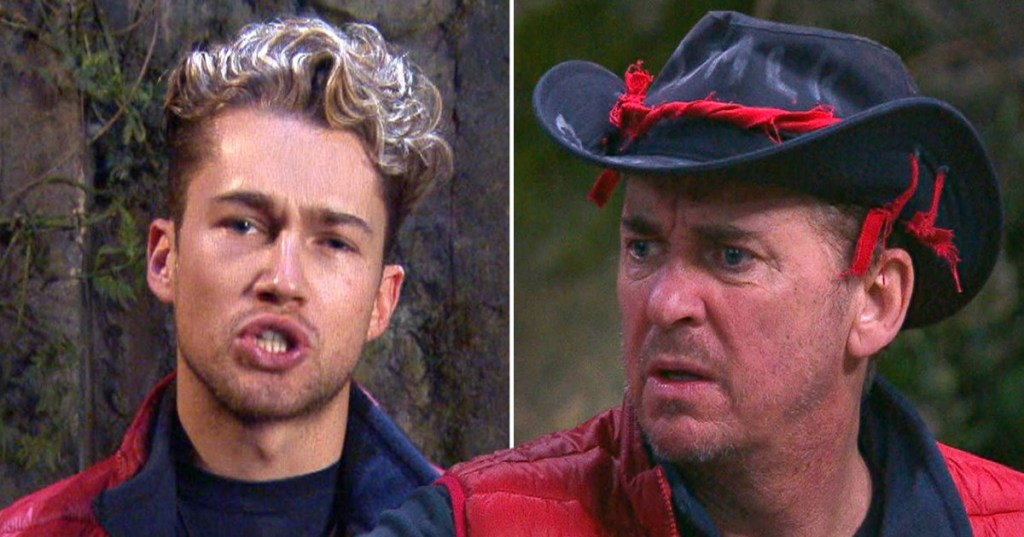 Tensions ran high on Monday’s I’m A Celebrity…Get Me Out Of Here! as AJ Pritchard and Shane Richie faced off over camp chores.

As the former Strictly Come Dancing star got an early start in the morning, he wasn’t happy to see the pots and pans hadn’t been cleaned from the night before.

Singer Russell Watson had noticed the atmosphere had changed, telling the Telegraph: ‘Mood today in camp is a little different than it has been the past few days.

AJ said that he liked his role in camp as he was the one who got to ‘gently persuade’ people to do their bit.

He approached Shane, who was in bed, and asked him to sort the washing up.

The actor appeared to be annoyed by AJ’s reminder and told him he couldn’t clean them because he needed hot water.

‘I left them to soak last night, all ready to be cleaned but I need hot water,’ Shane said.

Meanwhile Giovanna noted that some people were approaching chores ‘more reluctantly than others’.

Shane arrived in the main camp area and repeated that it wasn’t his job to fetch hot water.

The episode also saw him complain to Vernon Kay about Jessica Plummer’s performance in the bushtucker trial.

I’m A Celeb: Beverley defends herself as she’s ruled out of trial on medical grounds

Shane described Jessica and Jordan North as ‘from the same cloth’ because of how terrified they were in trials.

He added: ‘I say this every year I watch it, why do you do it? You know what’s gonna happen.’

I’m A Celebrity…Get Me Out Of Here! continues Tuesday at 9.15pm on ITV.


MORE : It’s MC Meryl Streep as star tries her hand at rapping on soundtrack to Netflix movie The Prom