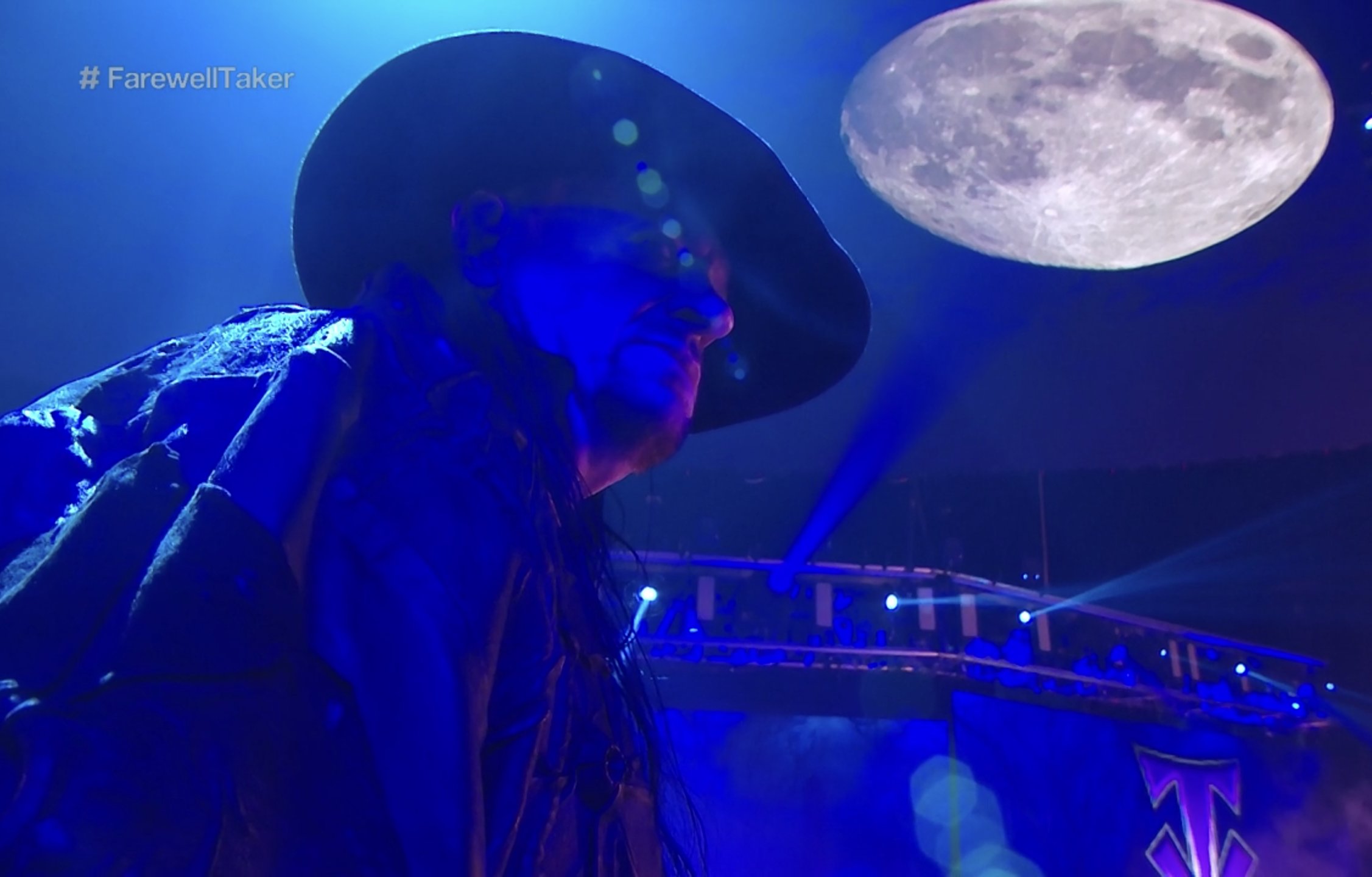 WWE legend The Undertaker ended his career on an emotional note at Survivor Series – exactly 30 years after his debut.

The Dead Man has defined pro wrestling for three decades, with the most enduring character in the history of sports entertainment, and his final bow was a fittingly theatrical farewell to one of the greats.

After the night’s main event – which saw Roman Reigns defeat Drew McIntyre – a host of legends and friends from Taker’s career came down to honour him.

Batista, John Cena, Edge and “Stone Cold” Steve Austin all appeared as talking heads at the end of the clip, and when we came back to the ThunderDome, Vince McMahon was alone in the ring, clearly heart-broken as he paid tribute to Undertaker.

The boss – who looked like he was choking up – said that tonight marked the end of an era, and something that will never be duplicated, as he insisted anyone saying ‘nothing lasts forever’ is wrong, because his legacy will.

Undertaker himself came out next with an incredible version of his iconic entrance, before he delivered a short but sweet speech to bring his career to an end.

‘My time has come to let The Undertaker rest in peace,’ he uttered before getting down on one knee as his music blared out.

In an amazing touch, the Phenom’s late, great manager Paul Bearer appeared as a hologram holding the legend’s infamous urn, before Undertaker made one final walk back up the ramp.

The night got started with the first of two traditional Survivor Series bouts as Team Raw won in a shocking clean sweep.

Seth Rollins sacrificed himself to the Brogue Kick, and one by one the Raw men’s team just kept on rolling, with spirited efforts from Otis and Jey Uso proving not to be enough.

When all was said and done, Keith Lee hit the Spirit Bomb on Uso for a big win one year after the former excelled at the same event.

Up next, The New Day and The Street Profits put on an absolute tag team clinic as the standard bearers of both divisions met in a battle of the present and future.

Kofi Kingston and Xavier Woods – who were accompanied for their entrance by Big E – showed more aggression than ever before as they tried to keep up with Angelo Dawkins and Montez Ford.

In the end, Street Profits were able to pick up a huge win – and now we really need a Ford/Kingston feud one day.

Sami Zayn was at his sneaky, deluded best as he tried to escape from Bobby Lashley and goad the Hurt Business into a DQ loss.

It was a dominating – but highly entertaining – win for the United States Champion, who picked up the victory with a Hurt Lock to make it 2-1 to Raw.

Backstage, Roman Reigns gave Jey Uso a dressing down for his Survivor Series loss and insisted his cousin needs to make his team respect the family before sending him on his way.

We returned to the squared circle for our next match, which saw Sasha Banks earn a statement (pun intended) victory over Asuka as the two familiar foes created magic in the ring yet again.

It’s the first time the Legit Boss has pinned the Empress of Tomorrow, but you have to wonder where the latter goes from here as she needs a big boost to get back on track.

The women’s Survivor Series match was brilliantly booked, with everyone elevated in their own way and given time to shine.

From Peyton Royce pinning Bayley to Bianca Belair’s arrival on the main roster, this was great – with a feel good ending as Lana lucked her way into winning as sole survivor.

The main event of the night saw Drew McIntyre and Roman Reigns clash in a battle of worlds champions and one of the matches of the year.

The Tribal Chief has been on fire while the Scottish Psychopath has enjoyed a career-making year, and this hard-hitting bout wouldn’t have been out of place as the final match at WrestleMania itself.

In the end, Jey Uso made the difference with a superkick after a low blow from Reigns helping the latter to victory.