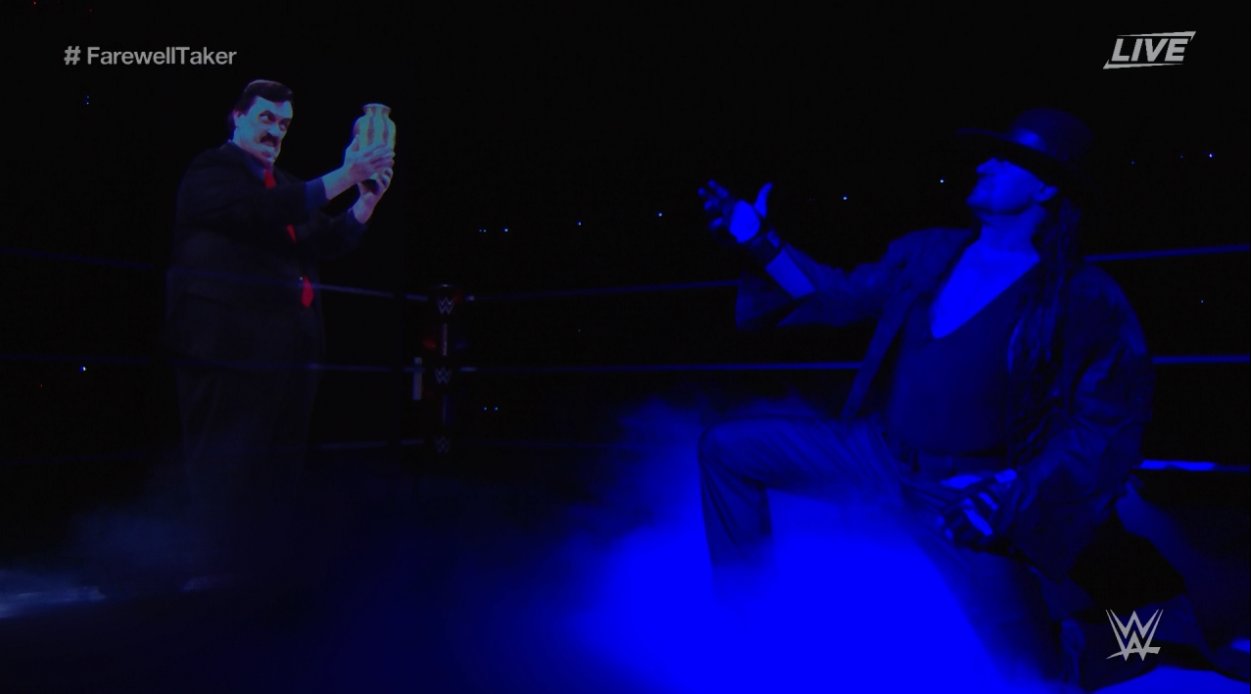 WWE said farewell to The Undertaker at Survivor Series – and it was only fitting that Paul Bearer made an appearance.

Much of the Dead Man’s career and character was defined by his legendary manager, played by real life mortician William Moody, who sadly died in 2013.

On Sunday night, the Phenom stepped out to say goodbye to the wrestling world and call time on his illustrious, 30-year run at the top, and WWE had a trick up its sleeve to leave everyone watching an emotional wreck.

After the likes of Kane, Ric Flair, Rikishi, Vince McMahon and even Savio Vega made an appearance, it was right and proper that Paul Bearer should be represented in some way.

For WWE, that way was right there in front of everyone, as the wrestling icon appeared as a hologram, clutching Taker’s infamous urn as the former world champion bowed to his late friend.

The Dead Man has defined pro wrestling for three decades, with the most enduring character in the history of sports entertainment, and his final bow was a fittingly theatrical farewell to one of the greats.

After the night’s main event – which saw Roman Reigns defeat Drew McIntyre – a host of legends and friends from Taker’s career came down to honour him.

Batista, John Cena, Edge and “Stone Cold” Steve Austin all appeared as talking heads at the end of the clip, and when we came back to the ThunderDome, Vince McMahon was alone in the ring, clearly heart-broken as he paid tribute to Undertaker.

The boss – who looked like he was choking up – said that tonight marked the end of an era, and something that will never be duplicated, as he insisted anyone saying ‘nothing lasts forever’ is wrong, because his legacy will.

Undertaker himself came out next with an incredible version of his iconic entrance, before he delivered a short but sweet speech to bring his career to an end.

‘My time has come to let The Undertaker rest in peace,’ he uttered before getting down on one knee as his music blared out.