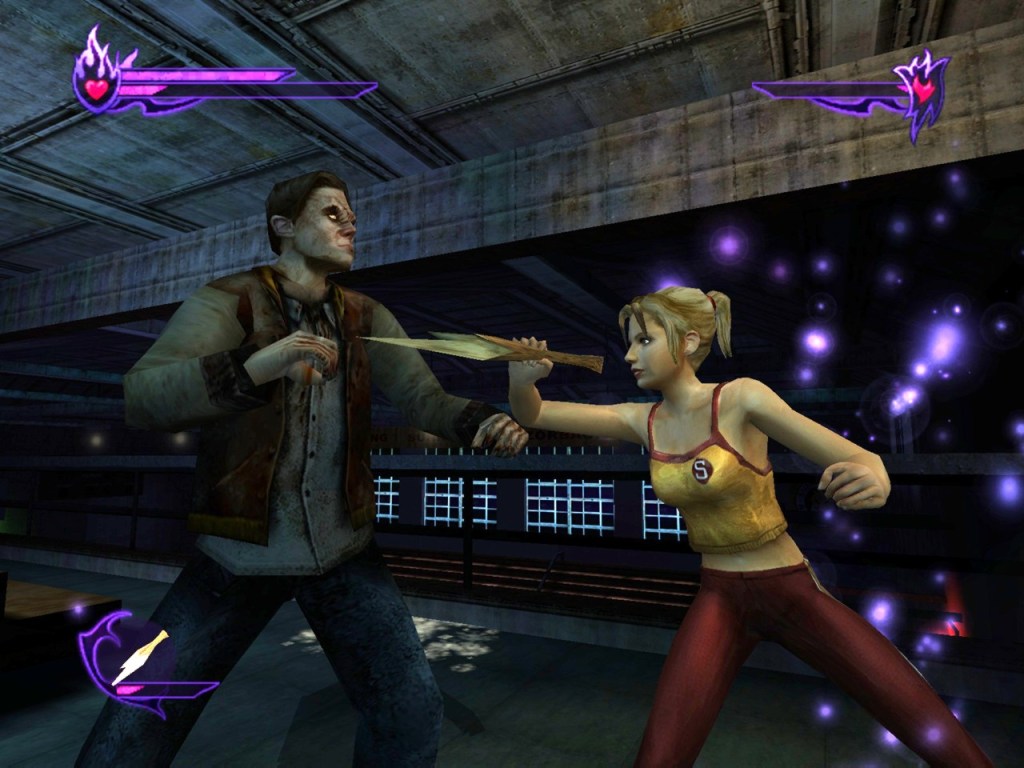 A reader looks back at one of the best Buffy The Vampire Slayer games and explains why he thinks it’s one of the greatest games on the original Xbox.

It’s crazy to think Buffy ended 17 years ago and started 23 years ago! The show still holds up today, despite some questionable special effects and fashion choices. The reason it holds up even now is the witty and intelligent writing, believable characters, and multi-layered protagonist whose superpowers and destiny gave her an interesting dynamic.

Unlike a show like Charmed which featured a similar premise of powerful women fighting the forces of evil, Buffy’s grey morality and metaphorical demons made it a far more interesting watch and has maintained a huge audience two decades after it first aired.

Buffy had many media tie-ins, from comic books to a failed cartoon series, but many forget that Buffy had six video games based on the show, two of which were major console games. Today I’m looking back at the game that made me switch from PlayStation to Xbox. I was such a such a huge Buffy fan that this original Xbox exclusive was the reason I bought the console. Not Halo: Combat Evolved, but Buffy The Vampire Slayer – here’s my review of the game.

Buffy begins sometime during season 3 and works as an extra-long-lost episode from of the show. The story starts with Buffy retraining to be a cheerleader to help out her friend Cordelia, their rehearsals are interrupted when a group of vampires cut the power to the school and start attacking the students inside. Buffy then comes face-to-face with a superpowered vampire called Malik whose sole intention is to steal a book on spirit channelling.

Malik turns out to be working for series favourite Spike and the stolen book summons a demon named Lybach who possesses Drusilla in order to manipulate Spike into doing his bidding. Lybach plans to resurrect old Buffy foe The Master using human sacrifices. It’s Buffy’s job to stop anything and everything The Master throws at her, including large shrimp demons, shape-shifting vampires, possession of Angel, and crazy dream-like realms.

The game does an excellent job of slotting straight into the series, though with its 10 to 12 hour length it would likely be more of a three episode arc than a standalone episode. Joss Whedon provided support for the game’s writing process and it shows, the witty dialogue from the show is present which makes it really feel like a proper part of the Buffyverse.

In fact, the writing is so strong, especially character interactions, it puts a lot of other modern AAA games to shame. Buffy deftly manages to provide a tense teen horror game with the comedic punches of the TV show and it really makes the game feel unique.

It’s an entertaining adventure that even in its slower moments doesn’t ever get boring. Had this been a story arc on the show I believe it would have been well liked by fans.

For its time Buffy was a very good looking game, coming out within a year of the original Xbox’s life cycle the game really pushed the console’s graphical capabilities, featuring excellent character models that looked very much like their TV show counterparts and impressive lip-synching. Buffy herself looks great, but sadly Sarah Michelle Gellar decided not to provide the voice or likeness so the in-game model doesn’t look exactly like her. But it’s close enough and thankfully the voice actress does an excellent Buffy impression and her performance is spot on – she manages to nail the characters quippy style while still possessing the vulnerability that makes Buffy so compelling.

One minor annoyance with the game is Buffy’s repetitive quips to enemies or her inability to unlock doors, she seems to roll off the same spiel over and over – luckily there’s variety in some instances and her interactions with the Scooby gang are comically delightful.

Environments are also beautifully detailed and really bring the world to life, with fallen debris littering caves and tombs and destructible furniture you can sling enemies through. I was incredibly impressed by the game’s ability to recreate the TV show’s locales with great accuracy. The high school is a particular standout, with the interior almost identical to the TV show. During my original playthrough I remember wishing the whole school were accessible, as I wanted to fully explore this iconic place.

Other elements also impress, particle effects are superb, with vampires exploding into dust when staked and magical powers glowing with bright neon colours against the grimy brown and grey environments – it looks great. Lighting is hit and miss though, often being a little on the dark side, but well-lit areas look good with god rays of sunlight peeking through boarded up windows in Angel’s mansion, for instance. A HD remaster with improved lighting would be amazing!

Buffy’s a third person action adventure beat ‘em-up with light puzzle solving and platforming. It combines its ingredients very well, keeping encounters with enemies varied and interesting. On the hardest difficulty Buffy can provide a reasonable challenging. It’s not going to drive you to edge of insanity like Sekiro, but some fights require good timing of blocks and a good knowledge of the environment.

Enemy artificial intelligence is decent, vampires will throw projectiles at you when they are far away, but then pick up weapons lying around the environment to use against you in close quarters. On harder difficulties enemies will block your attacks, so just button mashing won’t always lead to victory and the player has to change tactics to gain the upper hand. The combat in Buffy is excellent. With a button designated for punches, kicks, jumps, blocking, and staking, they can be combined in many different ways to unleash satisfying, yet simple combos.

Buffy also has a few special moves which when deployed make Buffy glow purple, with time slowing down momentarily; these devastating attacks keep the combat fresh and when smartly used can save you in some of the trickier fights. These can be used when your slayer gauge (a gauge above the health bar) is adequately full, this is refilled when enemies are killed – it feels great to send an enemy flying with a super-charged punch and really displays Buffy’s superhuman strength.

Buffy also has access to a number of weapons, starting the game with just her fists and feet and a trusty stake. Later in the game Buffy will obtain (a pretty pointless) crossbow, bottles of hellfire and holy water, a holy water/hellfire super soaker, mops, brooms, shovels, and a reaper blade complete with throwing wing. I loved the attention to detail in all these weapons, mops can be obtained in the janitors closet and allows Buffy to attack multiple enemies at greater range, but it slower movements leave her open to attacks. These weapons will also degrade over time, eventually breaking to become a stake – it’s seriously cool.

There are even environmental hazards you can use to your advantage, the depth here is rather surprising as you’re able to launch a vampire into a boarded up window to let the sun destroy him or throwing others into wooden spikes to dust them hands-free. Other details, such as hellfire/holy water vials that can be used as projectiles or combined with crossbow bolts to create superpowered arrows, or just use them to refill your super soaker, give the game’s systems far more depth than other similar games from the era. There’s even an upgrade system whereby finding hidden crystals in each level will allow Willow to upgrade your health and slayer power using her witchy magic.

Buffy herself is light on her feet and responsive, but her attacks feel weighty and powerful; the sound effects in the game are excellent with each punch and kick landing with a gratifying thud. The reaper blade in particular slices through enemies with metallic shredding noise that sound great and really adds to the satisfaction of using the weapon. Music is also well done, the game knows when to be quiet and allow Buffy to have an ominous and tense atmosphere, but peppered throughout the game are moments where the early 2000s techno kicks in to build excitement, and boy does it work. Tearing through three vampires and a hellhound to the upbeat soundtrack is one of the best parts of the game and isn’t used too often, so it never loses its impact.

A couple of the game’s less inspired moments come from either the far too easy puzzling or the slightly uneven platforming. Buffy jumps really far and often will stagger forwards if she goes off balance, this can lead to her staggering off platforms or just jumping further than you expect. Luckily Buffy’s auto-grab onto edges works very well so it’s rare you’ll even miss the ledges. It’s very much a minor annoyance and was only an issue for me during a level mid-game at the Sunnydale Docks, which involved precise jumping on crates floating in water (Buffy can’t swim for some reason).

I have no qualms about calling Buffy The Vampire Slayer one of the best games of the original Xbox generation, it combined superb visuals, a compelling and well-written story, fun and varied combat, and top-notch voice acting. Not only that but the game holds up remarkably well for an 18-year-old title, more so than other classics from the console like Halo: Combat Evolved, in my opinion. Here’s hoping it will get the backwards compatibility patch it so rightly deserves.

Cons
• Jumping can be inaccurate
• Puzzles are far too easy


MORE : I paid twice the price for a PS5 and I don’t regret it – Reader’s Feature


MORE : The best vehicles in video games and why they matter – Reader’s Feature