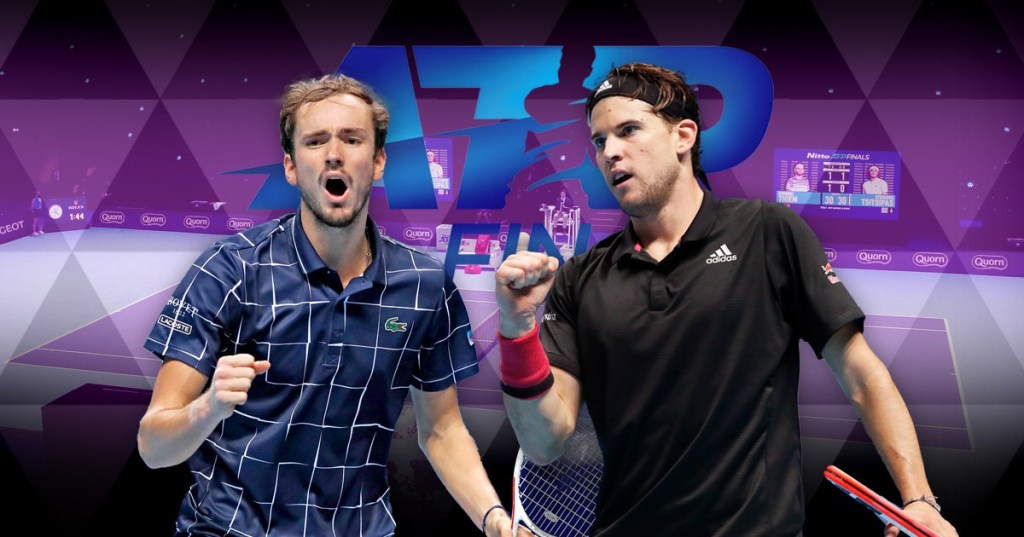 When Novak Djokovic and Rafael Nadal are part of a semi-final line-up, you might reasonably expect them to meet in the final. At least, you’d expect one to progress.

You would certainly expect them to be there with Nadal serving for the match and Djokovic 4-0 up in a deciding set tiebreak… but not at this year’s thrilling ATP Finals.

Dominic Thiem and then Daniil Medvedev dumped the world No. 1 and 2 respectively out of the tournament to get one last shot at silverware in 2020.

Austria’s Thiem, 27, or Russia’s Medvedev, 24, will be the last man to win the ATP Finals in London after 12 successful years at the O2. Even in the absence of fans, they have both played their part in making this a memorable tournament.

These are the two players who have closed the gap most on the ‘Big Three’ in recent years and they sit behind Djokovic and Nadal in the rankings.

So it was somewhat fitting that they’ve each beaten both players en route to the final.

Thiem will arguably be considered the best hard court player in 2020 if he seals the title.

The Austrian won his first major title at the US Open in September and finished runner-up to Djokovic in a five-set thriller at the Australian Open at the start of the season.

He set the bar for complete performances here in a fabulous straight sets win over Nadal in the group stages – still, for my money, the highest-quality match of the tournament.

It’s tough to choose between his semi-final with Djokovic or Nadal’s defeat at the same stage to Medvedev for the most dramatic.

Thiem, who missed four match points in the second set, looked set to succumb to an agonising loss as he fell 4-0 down in a third set tiebreak. But he had other ideas.

The world No. 3 suggested luck had played its part – ‘I got a little bit lucky… I went for every single shot and every single shot went in… it’s not gonna be like that in every match I play’ – but as Djokovic put it: ‘What he did from 0-4 in the third-set tiebreaker was just unreal… What can you do?… he just took it away from me.’

Medvedev pulled a similar rabbit out of the hat in his win over Nadal.

He broke Nadal to love when the left-hander from Spain was serving the match after winning three games on the spin.

The fightback brought an end to a 71-match win streak for Nadal when winning the first set – a run that stretched back to February 2019.

When you factor in that Medvedev had mental demons to contend with, too – he’d never beaten Nadal and threw a 5-1 deciding set lead away in his most recent loss – this was an extraordinary win.

There will be many, particularly ardent fans, disappointed not to see Djokovic and Nadal in the final but Thiem-Medvedev is a marriage of gloriously different playing styles.

Thiem boasts raw power off both wings and regularly blasts his way through opponents.

By contrast, Medvedev – aptly nicknamed the ‘octopus’ – has an incredible knack of getting a racquet on anything thrown at him and breaks opponents’ brains by craftily manipulating the ball around the court with vicious spins.

Both are extremely good athletes and few, if any, cover the court as well.

On top of their four previous tour-level meetings, Medvedev revealed the pair have had a good look at each other up close during this event, despite being kept apart in the group stages.

‘Dominic is amazing player,’ said the Russian. ‘I practised with him two times here on centre court, because we knew we can’t play together, so we actually practised two times, two first times.’

Not that there’s much they won’t already know. They first met nearly a decade ago at a junior clay-court tournament in Umag, Croatia.

Thiem – three years his senior and, in Medvedev’s words, a ‘superstar among juniors’ – thumped a young Medvedev 6-2 6-0 before offering him some sage advice.

‘I had crazy attitude on the court, like 10 times worse than right now,’ said Medvedev, who has been known for his hot-headed tantrums.

‘He told me after the match, “You’re going to have a good future maybe, but you need to be a little bit more calm”. Because I was going crazy.

‘And I don’t know if he remembers this, but it’s funny to remember sometimes like this when we are going to play final tomorrow.’

It would be a major shock if Thiem rolled Medvedev over by the same scoreline on Sunday but calling the result is far from straightforward.

Both have produced moments of magic this week. Both have shown they can hold their nerve under the most intense pressure. Both know what it takes to win big titles.

With little to choose between them both on paper, one statistic has tugged on my poetic heart strings to back Medvedev.

A win on Sunday would see Medvedev become just the second man in ATP Finals history to win the title in his second appearance in the tournament after making a winless debut.

The first, in 2008 in Shanghai, was fellow human backboard Novak Djokovic. The tournament moved venues the following year and Djokovic went on to win four more titles.

Perhaps it’s a fitting end for this tournament’s stay in London for the successor – in playing style terms, at least – to the player with the most titles at the O2 to win for the first time before embarking on a new era in Turin.