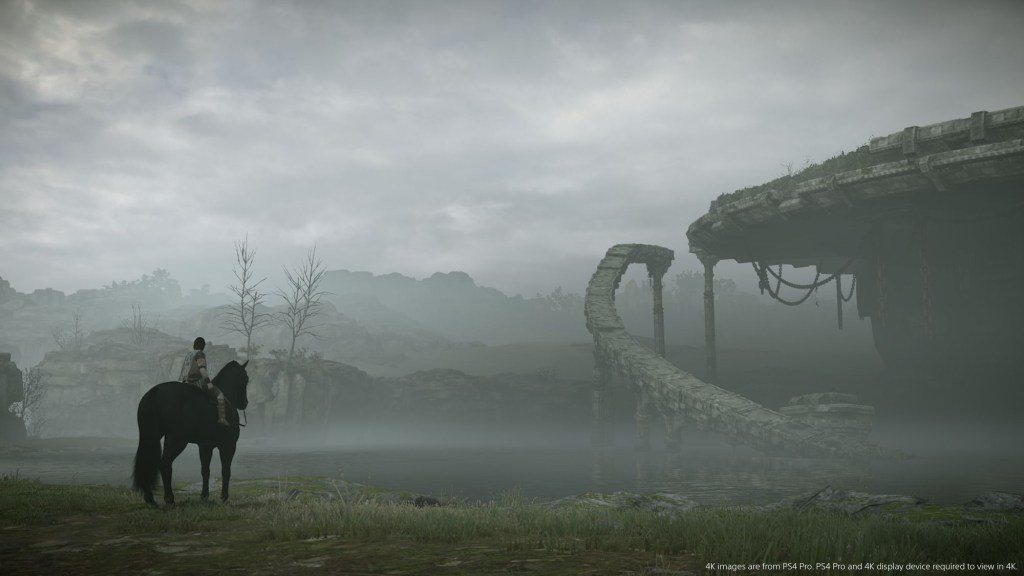 A reader chooses the best horses, cars, and spaceships in video games and explains why they can be as important as speaking characters.

A friend of mine calls walking ‘shanks’ mare’. In the human world it is the lowest form of travel, next to a Segway. In the gaming world, not so much. Walking or running in games is usually the default unless distance necessitates a car but, mostly, we explore our virtual worlds on foot.

Like a digital Top Gear I’m going to look at the various forms of simulated travel and rank them in a top five that they may as well have been carved in stone and hauled down from mount Sinai by Moses himself, so certain am I of their manifest correctness.

I have decided, so great is my wisdom, to break each illustrious winner into various categories so your puny human brains are better able to appreciate my galactic level intellect. So, without further ado…

A mere one step above walking, most horses are a pain in the arse to use as transport. They are hard to manoeuvre; they usually run past you when you call them, they are mostly wilful with a latency that would make Stadia proud (a sick burn that I’m sure won’t age horribly). But they are also the most characterful mode of transport, full of personality, which means that most people connect with them on a deeper level over other methods of conveyance.

For me the winner of this is Agro from Shadow Of The Colossus. I made the most personal connection to this animal whilst also hating its guts, trying to wrangle it into position to shoot those bloody airbags on that flying colossus or the hair-tearing frustration of the geyser colossus. But Agro became a beloved comrade-in-arms and I felt the sting of his loss acutely, a pain only hours of gaming and interaction are able to illicit.

Honourable mentions must go to Roach from The Witcher 3 who could have got the nod because he hilariously had a habit of spawning in odd locations like trees or on top of sheds but didn’t because I used him less than the 5,000 meals I had in my Witcher bag. And, finally, the horses from Breath Of The Wild, which again don’t get the nod because, again, they were more hassle than they were worth.

The classic and most reliable steed used in games, however cars in games are not imbued with much personality and most are so disposable that they rarely linger in the memory, which make this one of the hardest categories to choose an outright winner.

If we put racing games in their own category, then that leaves us to listen to the angry bubbling of the Charger from Driver. Looking like it just rolled off the silver screen, this stomach churningly beautiful piece of automotive perfection oozed cool. I loved the control system dragged from Destruction Derby into one of the first truly open worlds.

The car had an even more unruly rear end than Kim Kardashian but that made it all the more fun to fire around Miami’s waterlogged dykes. Honourable mentions must go to the Banshee from GTA 3, a cool sportscar that sat reliably in the first islands car dealership. That thing flew like a lightning bolt and made you look uber cool in the process. And the taxi from Crazy Taxi, which was the equivalent of a hyperactive five-year-old who’s just been introduced to their first can of Red Bull.

A mate of mine used to infuriate me when playing Gran Turismo (we’re onto racing games now by the way) he used to pick the car his parents drove, which was a Mazda Demio. This was not the glamour I was looking for from a Gran Turismo game and the races he got involved in in his mythical Demio, whilst close and thrilling, did not push the scenery fast enough past the virtual window for my liking.

I instead craved the car that was vogue back then. The Nissan Skyline, a car that shifted like it was trying to go back in time, the distinctive hydraulic gear shifting sound is embedded in my head to this day. It took ages to get and properly tune up your Skyline and by the time it was in peak racing condition you loved it like a first born.

Honourable mentions must go the finny angular Piranha from the Wipeout series, which after lugging a Feisar round the track like trying to jump a bin lorry was a feeling like no other. And finally, the bikes from Lonely Mountain: Downhill while abstract exuded personality from the many ways I managed to grimly wipe myself out on a picturesque mountainside.

Gaming has a long history of illustrating space exploration, from the fighters of Colony Wars to the city-sized Keepstars in EVE Online. My winner for this has to be due to Stockholm syndrome, because it’s the Sidewinder from Elite Dangerous. This is a bad spaceship, it is slow, has a terrible engines and range, it has the defensive capabilities of a cat in a swimming pool and it has weapons which are the equivalent of throwing sand at the Sahara Desert but I loved it all the same.

Trapped in this tin can, hurled into the deep, trying to line it up with a mail slot to dock was deeply satisfying to me (anyone who uses auto docking has failed as a human being). Honourable mentions go to the Normandy, the spiky-fronted interstellar knocking shop that housed Commander Shepard’s dysfunctional save-the-worlds brigade.

The final category is enhanced traversal, if you’re wondering what that is then wonder no longer because the winner is Spider-Man. Web-swinging in Spider-Man, when they get it right, is frigging amazing feeling but it’s actually a tighter category than you think because in here, we also have to have Batman’s zipline. And Just Cause’s wingsuit and grapple combo, which unexpectedly makes this a hard fought category. I think Spider-Man wins purely based on gut feeling though.

And that dear friends is the end of our sorry tale. I hope you enjoyed it for what it’s worth and enjoy what remains of your all too brief weekend.


MORE : GTA Online’s biggest update yet has you rob an entire island