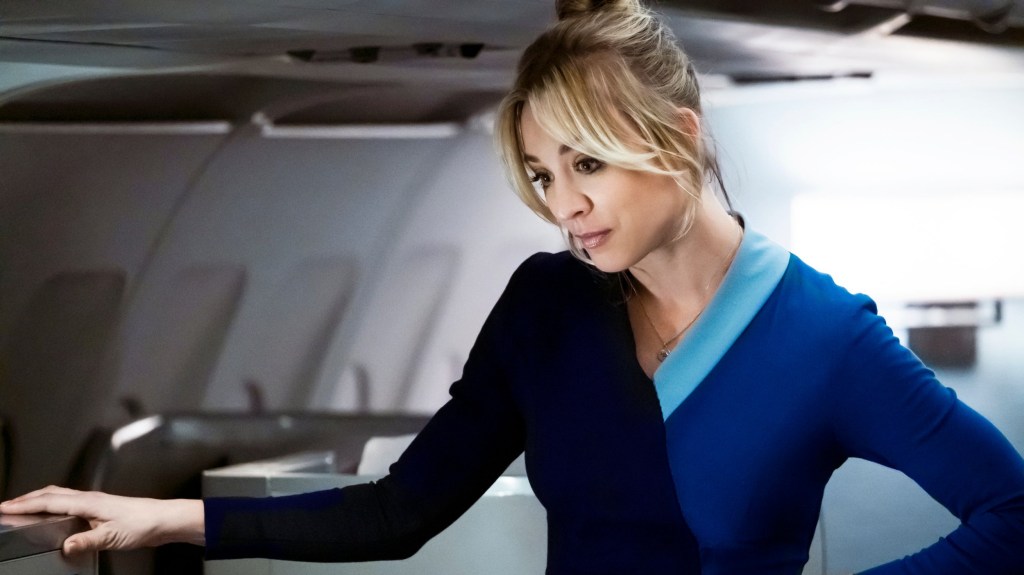 Having been Kaley Cuoco’s makeup artist for over a decade, Jamie Greenberg has been right at the star’s side for the biggest transition in her career as she moves on from The Big Bang Theory.

After 12 seasons as Penny on the smash-hit sitcom, Kaley is taking fans along on a slighter darker journey in her new comedic-thriller, The Flight Attendant.

Viewers will see the actress like never before as the show follows troubled air hostess Casey after she wakes up in Thailand with a dead man’s body in her bed.

Speaking to Metro.co.uk about how the actress embraced the new challenges she faced while making the show, Jamie explained: ‘The thing I love about her is she is such a workhorse. I remember when she read the book and got the rights, I immediately read the book and was like, “Oh my god, this is so good”.

‘I remember calling her asking, “Oh my god, are you going to have to do that crazy sex scene? You’ve never done that.” She like, “I know, isn’t this crazy?” She was so excited for all the new experiences because she fought so hard for this show.’

She added: ‘When she was shooting, she just couldn’t stop saying how exciting each step was. She is so passionate about her work and so proud that they’ve been able to do this so I think it’s going to pay off.

‘When I watched the trailer, I almost didn’t recognize her. She is killing it and I can’t wait for fans to see it.’

The MUA explained how the actress’ kind nature has helped her develop a loyal following of supportive fans as she stated: ‘She’s so successful but she is still so adorable. Kaley’s got everything going for her, she is a Hollywood darling and yet she’s still one of the most down to earth people I know.

‘I think people love the fact she is so fun. She doesn’t take life too seriously and she’s always just trying to make sure everyone is having fun in every situation.’

Jamie continued: ‘Even after all this success I could call her for anything and she would be here in two seconds, and I think fans can see that. She really is like the real deal – what you see is what you get.’

The actress isn’t just passionate about her own projects as Jamie revealed Kaley was one of the people who pushed for her to start her own makeup range.

The MUA recently launched her first collection of Jamie Makeup blighlighters – a dual-use product – and has had support all the way from her pal.

She admitted: ‘For a long time she would keep saying, “You need to make something, you should have your own line.” So I did and I’m so lucky that it’s already been getting great feedback. I’m seeing Kaley as she works on press for TFA and she’s so excited to play with everything in person.

‘She truly is a girl’s girl. She really supports those around her. Not everyone you work with is like that.’

Jamie revealed how Kaley and her other celebrity clients helped to inspire her blighter products as she explained: ‘I wanted to have the products that created the results of look I put on my girls, but I didn’t want women to need a celebrity MUA to do it for them.

‘They don’t need 15 brushes and 7000 items… that was the whole impetus. As I get older, I’m trying to be a little bit more conscious about how much I’m buying and how much I need and so are many other makeup lovers. I have some exciting things in the works.’


MORE : The Flight Attendant review: Kaley Cuoco is back with a bang in captivating murder mystery


MORE : Big Bang Theory’s Kaley Cuoco is prepared for some fans to hate her new drama The Flight Attendant