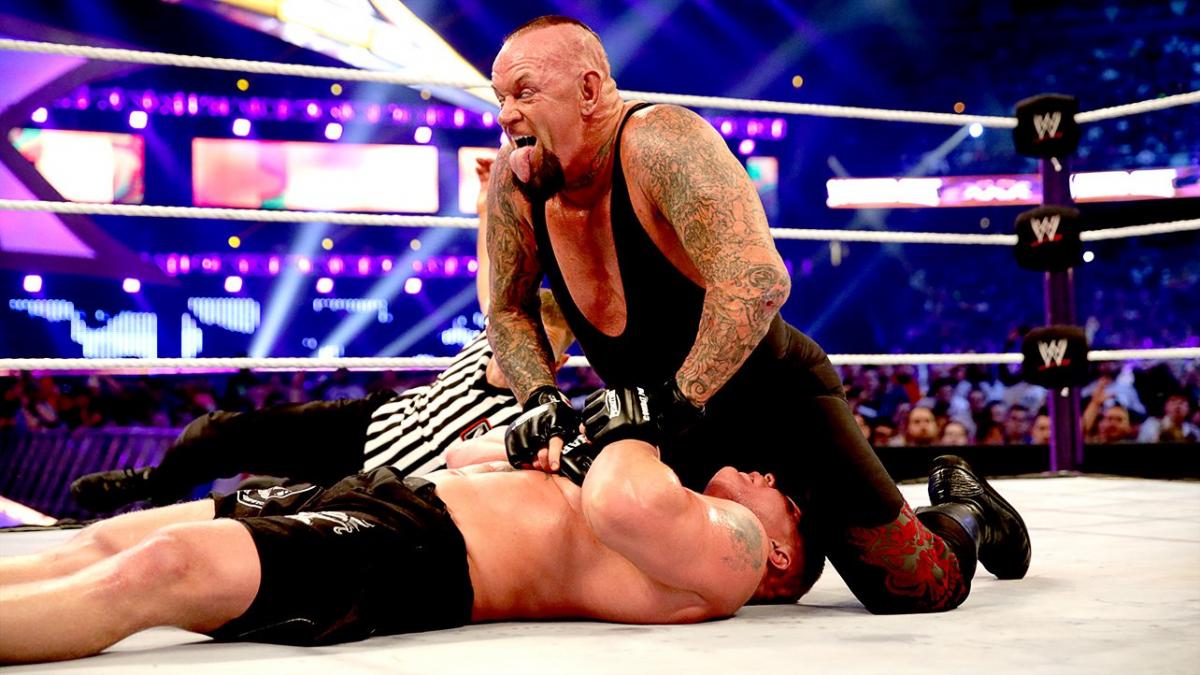 The Undertaker didn’t want his iconic WrestleMania winning streak to be broken.

The legendary WWE star insisted he had ‘no problem’ losing to Brock Lesnar at the show of show’s in 2014, but he he enjoyed the annual schedule and build the 21-match run afforded him.

He exclusively told Metro.co.uk: ‘Selfishly, you don’t want it to end! It was great because it allowed me, at that point in my career – I only had to work once or twice a year.

‘That was physically taxing in its own right, preparing for WrestleMania each year.’

The Dead Man has acknowledged that the Beast Incarnate didn’t need the victory to take him to the next level.

‘I don’t think Brock needed that win,’ he pondered. ‘I had no problem doing it, obviously. I just don’t think he was the guy that needed it.’

It’s a view shared by many fans and performer alike, including Shawn Michaels himself, whose career ended when he lost to ‘Taker at WrestleMania 26.

‘It was a little disheartening,’ the Heartbreak Kid admitted. ‘That Streak became important for all of us. We all were a part of making it what it was, and we were all under the impression that we were gonna let it stay that way.’

Kofi Kingston – currently one half of the Raw Tag Team Champions with New Day partner Xavier Woods – remembers the hushed silence that fell over the Mercedes-Benz Superdome in New Orleans as Lesnar hit an F-5 for the biggest three-count in WWE history.

‘All of a sudden, Brock wins and the entire room just stops what they’re doing, complete the silence,’ he recalls.

‘The entire arena stops what they’re doing. “No, this can’t be it, it doesn’t make sense.” Taker losing at WrestleMania? No!

‘You think about, what, 75,000 people in dead silence waiting to see what was going to happen next. Obviously the people at home too, you’re talking millions!’

Despite his own personal feelings and those of his peers, Undertaker – whose real name is Mark Calaway – was happy to do his job, even he would have rather seen someone else get the rub.

‘I think Roman Reigns or Bray Wyatt, it would have elevated them quicker to a higher status,’ he told us. ‘I think probably Roman could have used the victory more so than anybody.’

Of course, ‘Taker has had ‘Mania moments with both men, defeating Bray Wyatt in 2015 – years before his Fiend character took WWE by storm – and falling to Roman Reigns at WM33 in 2017, although the streak had already been broken.

‘Bray Wyatt and his development of The Fiend now, it’s gonna catapult him to the next level,’ he conceded, noting that the evil alter ego has lifted him to a whole other level.

‘Current roster, I have to say it would’ve been Roman,’ the Phenom added. ‘He should have probably – if you were gonna break it, it should have been him.’

The Phenom is a big fan of Reigns, who is tearing it up on SmackDown after transforming into the Tribal Chief alongside Paul Heyman.

‘One of the best things that I’ve seen done on WWE TV recently is the feud between Jey Uso and Roman Reigns. That, to me, has been great storytelling,’ he said during a recent media call.

‘People that understand the Samoan heritage and legacy know how important that stuff is to them. It starts and finishes with a good story.’

Those few words also sum up Undertaker’s unrivalled career, from his character’s beginnings and long-running storylines with the likes of Kane and Paul Bearer, through to his constant reinvention.

It’ll come full circle on Sunday – November 22 – at Survivor Series, 30 years to the day since he debuted at the very same event.

However, he’s sure this weekend won’t mark the end of his time with WWE, as he looks to help shape future generations of superstars.

‘I really haven’t figured that part out yet,’ he smiled when asked about his future.

‘Although the product is evolving and changing, I think there’s a lot of what I did, with storytelling that’s missing in today’s game.

‘I think that’s where I can be an asset to the guys and gals of the next generation… I’ll always have my place.’