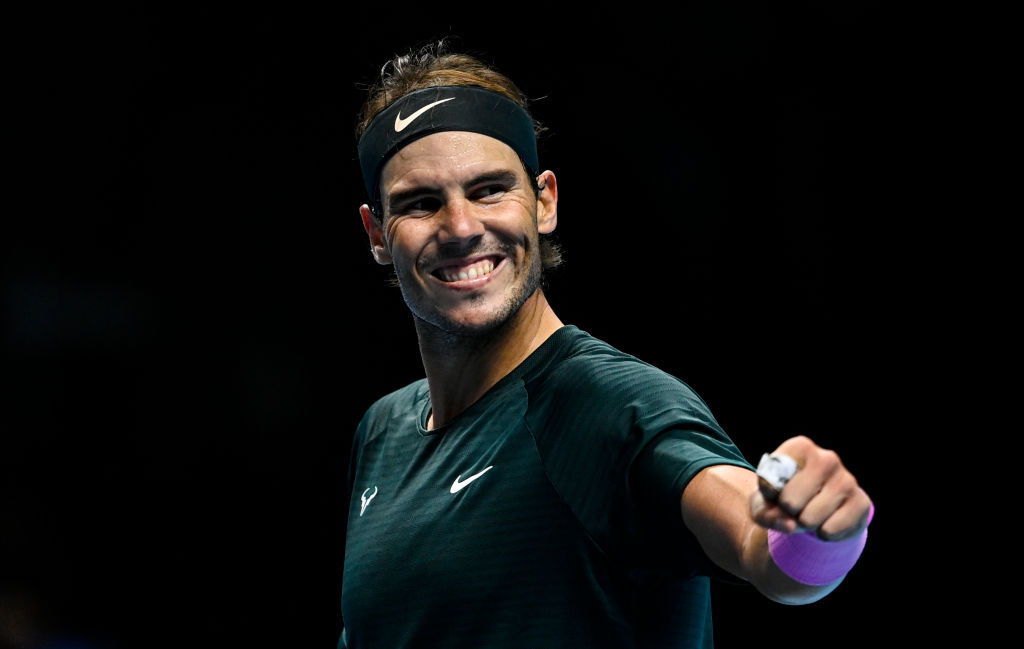 Rafael Nadal felt he produced a ‘great level’ of tennis in the majority of the first two sets of his three-set win over Stefanos Tsitsipas and was ultimately delighted to dig deep in a 6-4 4-6 6-2 tussle as he set up a semi-final clash with Daniil Medvedev.

Nadal, the 20-time Grand Slam champion from Spain, served remarkably well for two thirds of the match but after only dropping a single point on serve in his first four service games of the second set he wobbled and allowed his Greek opponent to level the match.

He was broken again in his first service game of the decider but his Greek opponent was also struggling and Nadal eventually surged through – something he, rightly, felt he deserved on balance.

‘I was playing I think a great level of tennis for almost two sets,’ said Nadal. ‘For doing the 6-4, 5-4, I think the score was close, but in terms of feeling I felt that I was playing better than him. Then the situation changed. He won that game and then I was starting to suffer a little bit more with my serve, no?

‘But it’s always good feeling when you are playing well and you’re playing against the best players of the world. You know you’re going to be a tough fight. That’s what happened tonight, no? I was able to find a way to win. Very happy.’

Nadal is yet to win this tournament and his clash with Medvedev is his first appearance in the semi-finals since 2015.

Given the high level of his displays at the O2 so far, there’s a sense he is in good shape to win a first ATP Finals title. But the world No. 2 from Spain insists he feels no better this year than last when he failed to progress beyond the round robin stage.

‘No, I was playing good last year too, no, just after the first match,’ added Nadal. ‘I don’t know. I am playing well, I think. I have one more day tomorrow to keep practising.

‘I am in a good feelings, but I played some great tournaments too in the past. It’s true I never won, but sometimes you play well and you don’t win, no? That’s normal in this sport, because the other players are very good too.

‘So, no, I am playing well. Yeah, happy to be in the semi-finals, of course, and excited. And, yeah, I am looking forward to play against probably the player who is playing better the last couple of weeks, and I’m excited about that.
Let’s see. Going to be amazing challenge and I hope to be ready for it.’

He beat his next opponent in a memorable three-setter in last year’s group stages.

Down 1-5 in the deciding set, Nadal clawed his way back to beat the world No. 4 from Russia, who missed a match point.

‘Well, it have been a close match I think. Of course at the end have been a very strange end of the match, no? I think it was a good level of tennis for most of the time, but is true that the end I was lucky and he make a couple of mistakes to close the match,’ said Nadal.

‘Yeah, I know it gonna be a tough one. I know I need to play at my highest level. If not, is almost impossible and I hope to be ready to make that happen.’

A philosophical Tsitsipas, meanwhile, was left frustrated by his performance in the final set.

‘I played very hard in the second set and played with the right intentions, which gave me lots of opportunities,’ said the world No. 6. ‘Quite disappointed with the third one. It didn’t go as planned. I was rushing.

‘I don’t even know what I was trying to do, honestly. Trying to be way, way too much aggressive. I was giving him free points without really, you know, himself doing much or hurting me from the back.

‘I should have handled it a little bit more clever and patiently, but it didn’t happen. My serve was not there when I needed it, and these guys, you just have to be there. I wasn’t fully present. I wasn’t playing in the moment.

‘Quite disappointed with that. But that’s life.’