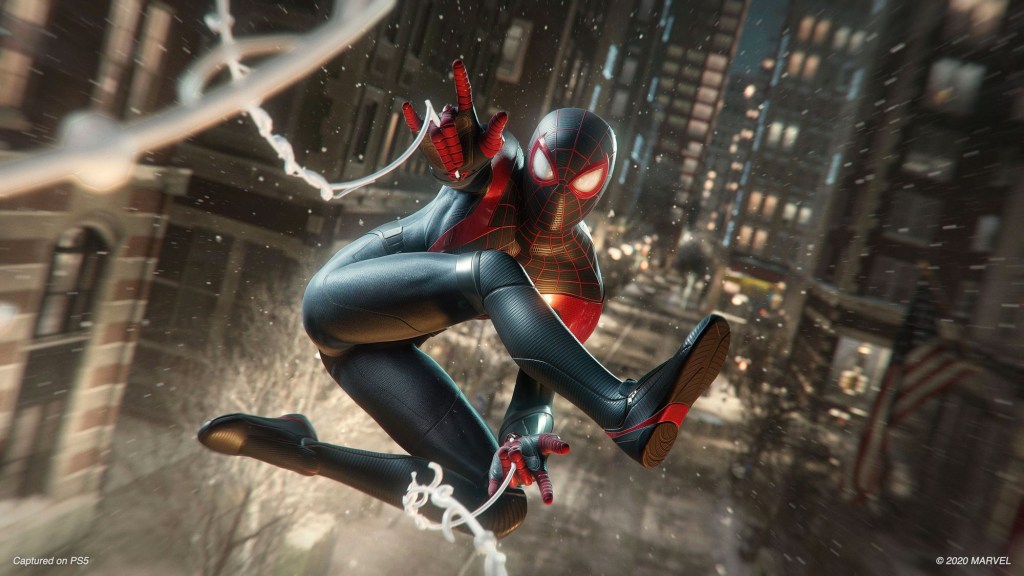 The next generation PlayStation 5 is finally available worldwide but while the console has had rave reviews what about the games?

It’s not unknown for a new console to launch alongside a classic video game or two. Super Mario 64, Halo: Combat Evolved, and Zelda: Breath Of The Wild prove that it can happen, but they tend to be the exception rather than the rule. Despite the enormous success of all four PlayStation home consoles the only one with a genuinely memorable launch line-up was the PlayStation 1, with Ridge Racer and WipEout.

The line-up for the PlayStation 5 though is really good and if it weren’t for coronavirus it probably would’ve been even better, as it seems obvious Ratchet & Clank: Rift Apart, and perhaps others, were originally intended to be released this year as well.

What’s left though is still very good, with all the Sony first party games getting positive reviews from us, along with a number of interesting indie and multiformat games.

Below you can see a list of everything that will be available on the November 19 launch day, along with a link to a full review where available, either for the PlayStation 5 version itself or the earlier PlayStation 4 edition.

Astro’s Playroom (Sony)
Everyone gets to play this game as it’s free with the console. But despite its short length and lack of challenge it’s a great little game and a perfect introduction to using the new DualSense controller. Score: 7/10

Marvel’s Spider-Man: Miles Morales (Sony)
Not Spider-Man 2 but a shorter length spin-off with a completely different set of characters, but if anything it’s better than the original, with an unexpectedly good villain. You can also get the more expensive Ultimate Edition, which comes with an upgraded version of the original Spider-Man game. Score: 8/10

Demon’s Souls (Sony)
A fantastic remake of the spiritual predecessor to Dark Souls, with incredibly good graphics and level and boss design that’s just as good as later games in the series. It’s also the only major launch game that is a PlayStation 5 exclusive (most of the others are also on PlayStation 4). Score: 9/10

Sackboy: A Big Adventure (Sony)
A fun four-player co-op adventure that’s half Super Mario 3D World and half Lego game, with some deceptively good graphics of its own. Score: 7/10

Godfall (Gearbox Publishing)
Decent visuals and combat can’t save this attempt to be Destiny with swords, as the repetitive mission design and enemies quickly begin to drag. Score: 5/10

Bugsnax (Young Horses)
An amusing parody of Pokémon that also has a serious side, with some very engaging characters – but the clunky gameplay and graphics leave it short of its full potential. Score: 6/10

The Pathless (Annapurna Interactive)
An excellent open world adventure that’s part Zelda: Breath Of The Wild and part archery sim, with some of the most enjoyable movement controls of any game this year. Score: 8/10

Devil May Cry 5: Special Edition (Capcom)
The original game updated with better graphics, including optional ray-tracing, the ability to play as Vergil in his own campaign, and a bunch of new game modes and options. Score: 9/10

Call Of Duty: Black Ops Cold War (Activision)
Not one of the better Call Of Duties – allegedly because of development problems long before the coronavirus – but the next gen version does have better graphics and performance. Score: 6/10

Assassin’s Creed Valhalla (Ubisoft)
The fastest-selling Assassin’s Creed ever is pretty much more of the same, but the Vikings theme and British landscapes look especially impressive on the PlayStation 5. Score: 7/10

Fortnite (Epic Games)
Given it’s ever changing nature and unparalleled popularity it’s meaningless to give Fortnite a score, but the next gen version adds a lot of new features, including ray-tracing, 60fps, and fast loading.

NBA 2K21 (2K)
We heavily criticised the PlayStation 4 version for its new shooting mechanic and poor story mode, not to mention horrible microtransactions, but there’s no denying the next gen graphics are amongst the best so far. Score: 4/10

Borderlands 3 (2K)
On the face of it Borderlands 3’s stylised visuals don’t seem to have a lot to gain from the next gen but the 4K resolution and 60fps options make a big difference, especially with the new four-player split-screen. Score: 7/10

Watch Dogs: Legion (Ubisoft)
Not as good as the last game, and its recreation of a near future London is not always convincing, but the next gen upgrade is impressive and definitely the best way to play the game. Score: 6/10

Dirt 5 (Codemasters)
It’s much less of a simulation than you might expect, which won’t please some hardcore fans, but as a driving game this makes some of the best use of the DualSense controller so far. Score: 7/10

Dead By Daylight: Special Edition (Starbreeze)
The popular online horror game has been quick to make the jump to PlayStation 5 but while it has a lot of DLC in tow the overall experience still gets repetitive much too quickly. Score: 6/10

No Man’s Sky (Hello Games)
A pariah when it was first released but this open world (well, open galaxy) adventure is considerably more entertaining than when it started, especially with the improved performance on PlayStation 5. Score: 7/10

Overcooked! All You Can Eat (Team17)
A surprising game to find on the PlayStation 5 at launch but this compilation of the first two games adds cross-platform online multiplayer for the first time and 4K resolution. Score: 9/10

Planet Coaster: Console Edition (Frontier)
The PC is the natural home of a theme park simulator like Planet Coaster but the increased resolution of the next versions definitely help make it work better on console. Score: 8/10

Observer: System Redux (Bloober Team)
This cyberpunk survival horror game had its flaws when originally released but while this improves the graphics and adds some new plot elements they don’t really fix the main issues. Score: 7/10

Warhammer: Chaosbane Slayer (Nacon)
Another oddity for the launch line-up, given how unremarkable the original was, but if you want a low-grade Diablo clone set in the Warhammer fantasy universe this does the job adequately enough. Score: 5/10

WRC 9 FIA World Rally Championship (Nacon)
You wouldn’t have thought the PlayStation 5 launch would need two rally games but while this is lower budget than Dirt 5 it’s a bit more serious and still has some interesting use of the DualSense. Score: 7/10

War Thunder (Gaijin Entertainment)
Although this is listed as a PlayStation 5 game in the PSN store it doesn’t appear to have been updated beyond the PlayStation 4 version yet, although it’s free-to-play so you can check for yourself.

Undead Horde (TripWire)
It seems a strange decision to want to port a mobile game to the PlayStation 5 but that’s essentially what this is. As a mix of strategy game and dungeon crawler it’s not terrible but we wouldn’t pay £14 for it, especially as it’s less than half that on mobile. Score: 6/10

Maneater (TripWire)
We’re starting to get near the bottom of the barrel here, with an entirely unnecessary remaster of the obnoxious and horribly repetitive shark simulator. Score: 3/10

72 people arrested after they were found crammed onto fishing boat

King Oddball (10tons)
This little known indie game has been bouncing around for years (it was a PS Vita title at one time) as you control a giant rock that lobs smaller rocks at tanks and aircraft with its tongue. It’s clearly tying to be the next Angry Birds and feels just as outdated and irrelevant as that sounds. Score: 4/10

Goonya Fighter: JigglyHapticEdition (Mutan)
Undoubtedly the most obscure launch title, this bizarre fighting game has you controlling characters that seem to be made of jelly, and which actually feel like it thanks to the haptic feedback on the DualSense. Even just walking forwards can see you falling over, thanks to the exaggerated physics, and although you’ll tire of it very quickly it’s actually quite a bit of fun at first. Score: 6/10


MORE : London Tube signs have been turned into PS5 symbols for launch


MORE : PS5 consoles are being delivered early in UK and Ireland