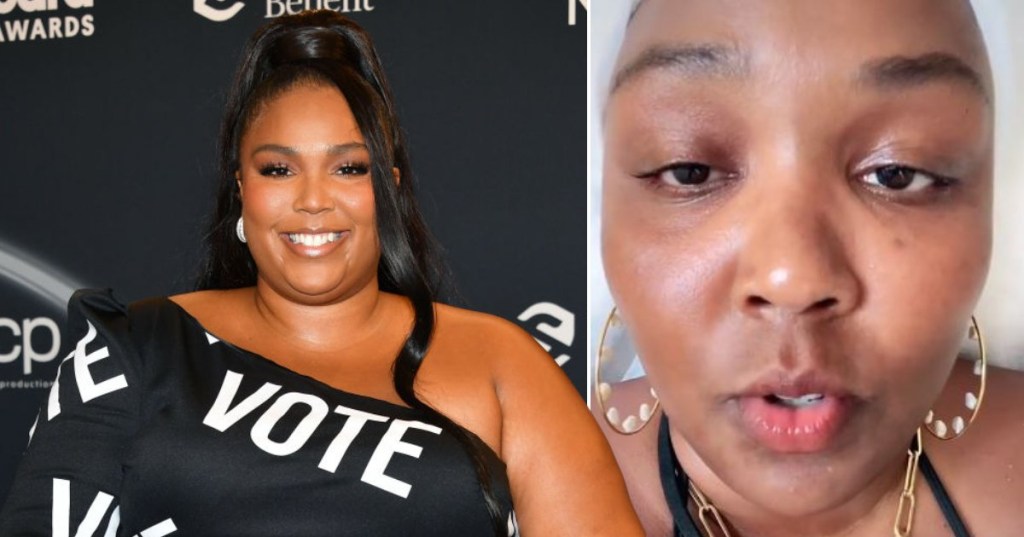 Lizzo was seen getting honest about the struggles she faces when it comes to fame in an emotional video she shared online.

The Juice hit-maker, 32, is often seen treating fans to little doses of realness on TikTok in between her usual booty-shaking, bikini-wearing videos and her latest clip was her insisting that fame and money ‘can’t buy happiness’.

Lizzo wasn’t afraid to show her raw emotion in her latest upload, as she told fans she was struggling and assured others feeling the same, that it was okay not to feel okay all of the time.

Touching on fame and the downsides it can bring with it, Lizzo said: ‘You can be like the coolest most richest person ever and it doesn’t buy you f**king happiness.

‘Money doesn’t buy you happiness. Fame only puts a magnifying glass on the sh*t that you already have.

‘If that sh*t is f**ked up, you’re just going to have even more magnified f**ked up sh*t and situations where it doesn’t even seem valid or like you’re even supposed to feel that way, so it f**ks you up even more because you feel super f**king ungrateful.’

Lizzo candidly told fans as she came over all emotional: ‘I’m just telling everyone now, anyone that has internal issues or has any type of self problem that they need to work out – work out now because money, fame and success, or even getting older, doesn’t really fix that sh*t.’

The star, who has become an advocate for body positivity, said: ‘You need to just do it. Do the inner work because no matter where you are, it’s always going to haunt you like a f**king ghost.’

‘I’m working on it too,’ she confessed, as she admitted: ‘But today is just not a good day. I just want everyone to know that it’s okay not to have a good day, when it seems like you should.’

Her emotional video comes after Lizzo was seen celebrating news Joe Biden will become the next president of the US, after beating Donald Trump in this year’s election.

Biden won 273 electoral votes, surpassing the 270 votes he needed to win the presidency and beat current president Trump, who is yet to concede while he contests the election’s results.

Lizzo had championed Biden throughout his presidential campaign and was seen reacting to news he had won on social media, where she shed tears of happiness.

‘There are a few times in this country, where I’m hopeful. Like every time I’m hopeful it gets taken away from me,’ she said. ‘And this time I was hopeful, and I was scared.’

The artist continued: ‘I think Trump is out of office, officially. I’m seeing the news everywhere, I think this is the end of that four year term that felt like 1000 years, where people lost their lives, their livelihoods. This country fell into a pandemic, a recession…. and you can’t really blame one president for things but you can blame them for how they handle it.

‘It was so mishandled, and I felt so unseen and so neglected. Whether you’re blue or red, that man didn’t care about you,’ Lizzo declared, as she went on to share her excitement over Kamala Harris becoming America’s new Vice President.

‘And I’m so ready to see if America can hold itself accountable. If we can go into a new era where people are listened to, and fundamental changes can happen so that we can all live here, equally.’