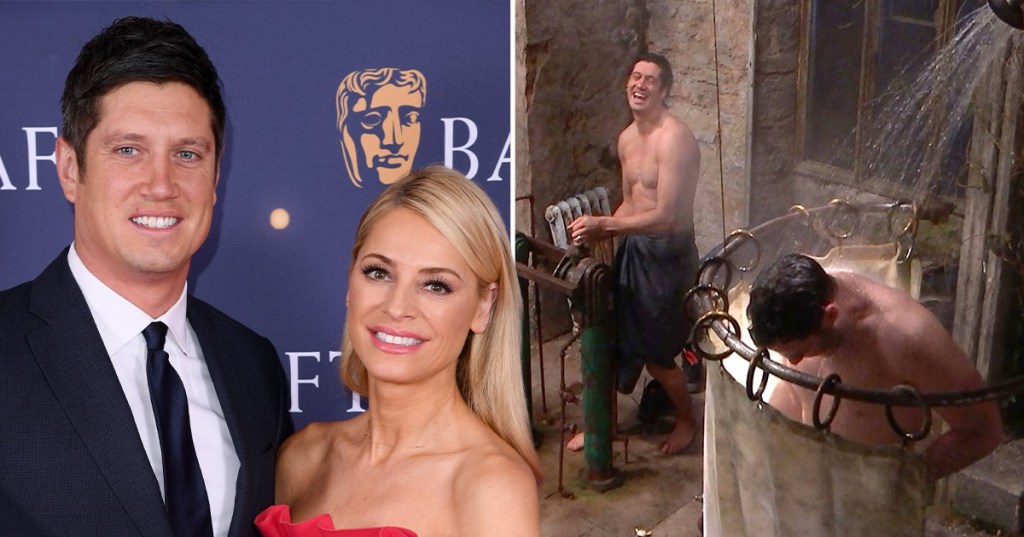 Tess Daly has joined in on the fans who couldn’t stop gawking at Vernon Kay as he took on the I’m A Celebrity shower.

The Strictly Come Dancing presenter has been tuning into her husband’s adventures in Gwrych Castle, Wales over the past two nights, with Vernon braving the shower on day two.

With Jordan North in tow, who had to pump the hot water in order to make the shower work, Vernon stripped down to his bathers to jump in the tiny bathtub.

Already comedy gold thanks to the 6’ 4’’ Family Fortunes presenter towering over the shower head, Tess (and half the internet watching) couldn’t help but gawp at him as he bathed.

Sharing a picture of the moment, Tess happily declared ‘Shower scene!’ before later sharing Jordan’s x-rated sounding groans at her husband as he jumped in for a wash too.

Groaning with delight as he told Vernon to ‘go faster and keep the pace, Jordan later told the cameras: ‘Tess, if you’re watching, it’s not how it seems!’

‘That’s got to be the most fun I’ve had in a shower in a long time,’ an exhausted sounding Vernon then sighed.

Tess didn’t seem to mind though, and instead joked: ‘I see a bromance starting.’

However, there were also fans who thought Vernon was just like Buddy the Elf – and got into the spirit quite quickly

Tess shares two daughters with Vernon – Phoebe, 16, and Amber, 12, and sharing a rare photo of the family sent her best wishes to him as started his time on the show.

While the first full day in the camp was seemingly a quiet one for Vernon, he’s now been thrown in the deep end to experience the full I’m A Celeb experience – by being voted to do the eating trial.

I’m A Celebrity: Tess Daly joins in with fans thirsting after Vernon Kay in shower scene

Joining Jordan and Beverley Callard for Frights Of The Round Table, Vernon is about to be put to the test by having to neck a series of rank delicacies designed for the challenge.

If he’s successful, he’ll be able to earn meals for the camp.

I’m A Celebrity… Get Me Out Of Here! airs nightly at 9pm on ITV.