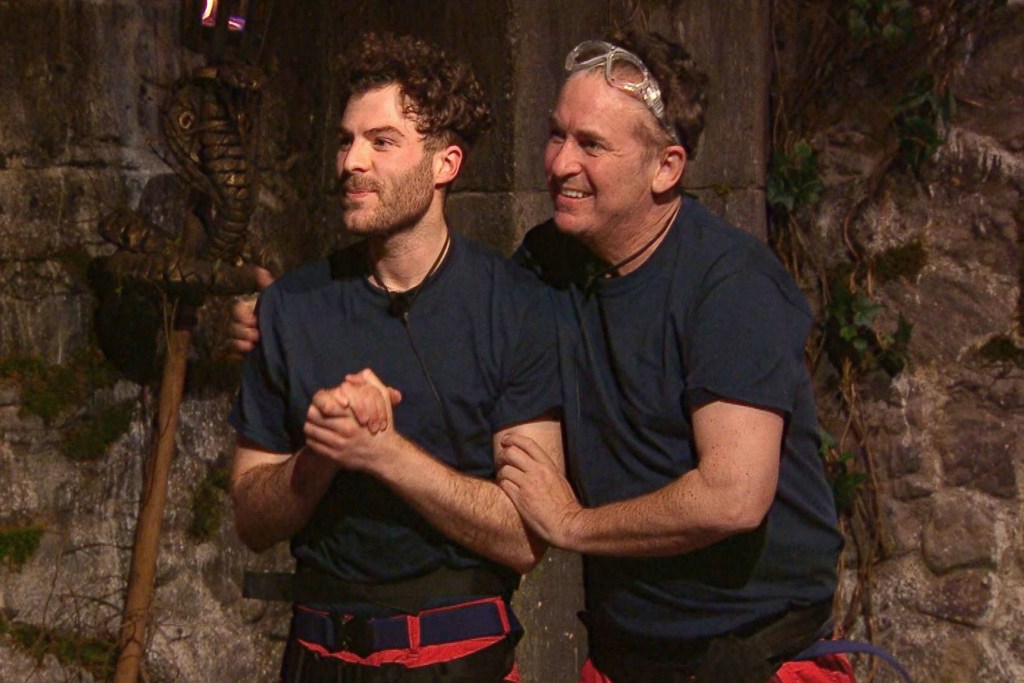 I’m A Celebrity is well and truly underway, with this year’s contestants enjoying their first full day in camp on Monday night’s episode.

The campmates got familiar with their new surroundings, while Shane Ritchie and Jordan North took on a terrifying Bushtucker Trial.

The campmates also enjoyed a spot of dancing and a dodgy-looking meal as they found their feet on the second show of the series.

But what exactly went down in last night’s episode?

The celebrities settled into life in camp, and their first night proved to be an eventful one for Sir Mo Farah.

The gold medal-winning athlete fell out of his hammock in the early hours of the morning, before admitting defeat and sleeping on the floor.

Shane Ritchie said: ‘In the middle of the night it was all quiet and all of sudden a ‘whack’, I looked around and Mo wasn’t in his hammock, he was underneath it.’

Mo said: ‘Sleeping in the hammock was a bit different, at some point in the night I must have fallen from it and just hit the ground.’

After waking up in his new surroundings, Mo added: ‘We have a good vibe to camp this morning, everyone’s happy.’

Later, Jordan and Vernon took their first shower, pumping the water for one another.

Next up, the campmates decided to keep warm by dancing by the fire.

The celebs copied Mo as he did his victory dance, before Jordan led the group through the Macarena and Beverley Callard took them through a Saturday Night Fever-inspired routine.

AJ Pritchard said: ‘Everyone just wanted to dance and release some energy.’

Mo was in a nostalgic mood on Monday’s show, sharing some of his favourite moments from his illustrious athletics career.

When Jordan asked Mo about his proudest sporting moment, Mo spoke about his success at the 2012 olympic games in London, and revealed that he has some of the olympic track framed in his house.

After Mo revisited his winning moment, Vernon said: ‘Having Mo in camp is a real focus for all our attention, he’s achieved so much, so when he talks, everyone listens.’

Talk turned to Super Saturday, where Mo won his gold medal in the men’s 10,000m. However, Jordan admitted that he missed the race because him and his mates decided to watch a DVD and a pizza instead – something he deeply regrets.

Vernon said: ‘Jordan confessing to Mo Farah that he missed Super Saturday was hilarious. He didn’t miss it because of a wedding or something like that, he missed it because him and his mates got boozed up and watched a cheap DVD.’

Jordan and Shane take on The Viper Vault

Jordan said he was ‘the scared he’d ever been in his entire life’ before Monday night’s Bushtucker Trial.

Jordan was emotional before taking on the challenge, called Viper Vault, which saw the pair lowered into vaults in the ground.

As presenters Ant and Dec explained, there were five locked safes inside each vault containing stars. The pair had to work together to find the codes for each of the safes, with dozens of snakes in with them for company.

Together, Jordan and Shane managed to get nine of the safes open and win nine stars for camp.

After finishing the trial, Jordan said: ‘That is the most terrifying thing I’ve ever done in my life.’

He added: ‘My brother, who is a paratrooper, said to me no matter how scared or cold you get to think of your happy place.’

After Jordan and Shane’s courageous efforts, dinner was delivered to camp. However, it wasn’t quite the banquet the celebrities were hoping for.

The camp were given eel, which didn’t go down well with the celebs.

Jordan admitted to being disappointed, saying: ‘I’ve just been in a piggin vault full of snakes and get home to my castle and I’ve got eel… nine stars for that, it was minging.’

Mo said: ‘The taste of the eel was different, I’m not really a big fan of fish. I took a bite of it and it was slippery.’

Who’s next to take on a Bushtucker Trial?

Poor old Jordan, it looks like he’s set himself up to be taking part in most of the trials this year.

On Monday’s show, Ant and Dec revealing that he’ll be taking part in the first eating challenge of the series, called Frights of the Round Table, alongside Vernon and Beverley.

I’m A Celebrity: Tess Daly joins in with fans thirsting after Vernon Kay in shower scene

This year’s I’m A Celebrity is taking place at the supposedly haunted Gwrych Castle in Abergele, North Wales, with travel to the Australian rainforest rendered impossible due to the Coronavirus pandemic.

Fans seemed to be enjoying the new setting, with some even claiming they preferred it to I’m A Celeb’s usual camp.

I’m A Celebrity continues daily at 9pm on ITV.